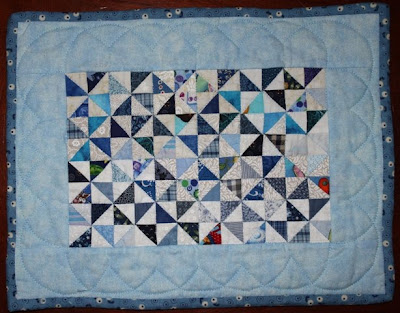 It has been a while since I have actually managed to finish anything. So I went digging through my Rainbow Scraps and pulled out the Blue Pinwheel quilt that I worked on during January. It was finished (even had borders!), but needed to be layered and quilted.  I did a simple stitch in the ditch by machine and scallops in the border.  I just finished sewing down the binding, so it is officially done, done. 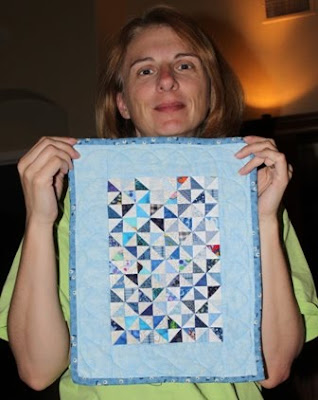 Kurt took the kids to the beach this morning, they came home all sandy and sunburned:).  Then I got my hair cut and took Sydney to a birthday party. After that it was a couple of loads of laundry and a bit of puttering around the house. Kurt rented Tron and I snoozed through it.  Not a bad Sunday at all.
We've got FCAT (Florida Comprehensive Achievement Test) testing this week at school so it will be lots of odd schedules and figuring out where to be. I think the rest of the school year is going to be a bit that way, so I'll just go with the flow.
Posted by scraphappy at 9:13 PM

That is so cute. Glad you were able to spend some time getting it finished. Hugs

Very nice.... pinwheels are so easy to make and look so good.

Wow, what tiny pieces! Glad you got it finished and enjoyed your day.

Its a great feeling to have a project completed!!! Congrats!!!

Ahhhh I wish I had the compliant of all sandy and sunburned!!!! There is still some snow hanging around, but thankfully it is going fast!!! Come on summer!!!!!!

I had hoped to do more on my green quilt this weekend, but other things came up. perhaps tomorrow I'll get back to it!

It is adorable...what a great use of small scraps!

And it looks beautiful

Your quilting and the whole little runner is great, can you do those scallops free hand?
KATRIN W.

That's so dinky! Have a good week.

Congrats on such a cute finish.

Doesn't it feel good when we FINISH something? I love the little blue pinwheel quilt.

Looks really sweet ! I love it.

That is such a cute little quilt!