We are just back from our favorite annual Easter tradition.  Each year my good friend Meisje hosts a big party where the main event is an egg hunt for the kids featuring cascarones.  I have no idea if I'm spelling it right, but they are confetti filled eggs that get smashed over the heads of innocent bystanders.  We always come home with confetti hiding out in all our nooks and crannies.  This year we managed to go without a camera, so I'm hoping that somebody will have pity and send me a picture or two.  The kids all passed out as soon as we got home and Kurt has run out to get goodies for a morning egg hunt of our own.  His family always hid entire baskets instead of eggs when he was a kid and mine did both plastic and dyed eggs, so we always "argue" about what we should do each year.  For two years in a row Kurt had the kids convinced that the party was the "real" egg hunt and we skipped the tradition entirely at our house.  The kids wised up though and requested that the bunny visit our own house as well. 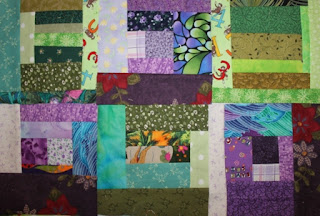 I'm zooming away on my mile a minute blocks.  If I were ever home for more than 10 minutes at a time I'm sure they'd be all done in no time at all. I just keep popping them back in for another round until they end up large enough to square up.  So far only 3 purples have come out at the end of the assembly line, but there are a bunch that are almost ready to be finished up.  I am thinking of finding a funky purple and green print of some sort to use as sashing between the blocks.  Mostly because there are a bunch of seams that would try to fight each other if the blocks go next to each other. 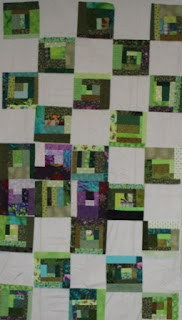 The second session of practice AP exams went well this morning. Several of the kids made a point of coming up when it was over and thanking me for coming in on the weekend to help them out.  I thought that was very thoughtful of them.  When we were all finished up at school I popped into Sears to look at refrigerators again.  We've been having trouble finding the style that Kurt wanted (double door fridge on top and freezer drawer on bottom with water and ice in the door) in a color that matched all our other appliances (bisque, also known as beige).  They happened to have just the thing I was looking for -- and it was on sale!  It should be delivered on Monday between 12:45 and 2:45! I'm sincerely hoping that nothing else breaks in the near future, 'cause I'm all shopped out.
Posted by scraphappy at 9:34 PM

Sounds like a fun Easter egg hunt. I'm liking how your MAM blocks are turning out. Hugs

I love your blocks! They are going to look great when they are all put together :) Take a break sometime and breathe!

I love those blocks, great effect when they're put together

Eater egg hunts must be such fun for the children; it's not really a tradition that has caught on very much here in the UK. Your blocks are going to be great, very colourful. I always think Americans must have huge kitchens; we have double door refrigerators in the shops (known as American refrigerators) but very few people would be able to fit one into their kitchens.