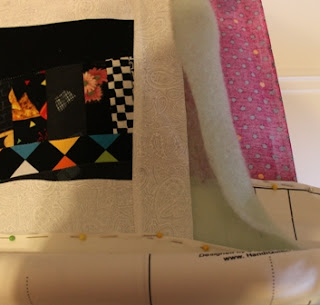 I was at training today instead of at school.  It is amazing what a small change in routine can do for your outlook and attitude.  I went in this weekend to work on sub plans, and though I'm sure I'll regret it later, I decided to spend a little bit of time before leaving for Academic Team tonight finishing up the quilting on my rainbow crumbs.  Things were going along well enough until I rolled down to the last little bit and realized that the bottom of the quilt is about three inches longer than the bottom of the backing fabric.  I checked before I loaded it on the frame.  I guess the top was just super stretch compared to the back?  There are a lot of seams in those crumb blocks.  What to do, what to do?  I guess I'll have to unload it, sew some more fabric on the end and then either reload it or quilt it on the regular machine?  I guess that is a problem for another day. I know it will bug me all day tomorrow if I don't do something about it though.  Mabye I should just quilt up to the red row and chop the black off the bottom, seems like a waste, but it could work.  Ahhhh, lesson learned, much better to have too much fabric instead of too little on the back.

Posted by scraphappy at 5:21 PM

Eeeek! How frustrating. But thanks for the lesson! I will bear that it mind when I come to quilt my first one!

I shuddered at the thought of chopping off a row...yikes!
What about quilting as far as you can, taking it off the frame, adding on another piece to the backing and finishing the quilting on your regular machine??

I FEEL your pain more than you know ... or maybe it's an epidemic. Guess WHO had to add 3 1/2 inches to one edge of a quilt backing today after it was otherwise completely pin basted with hundreds of pins?

It was a pain, but I think in the distant future someone might notice it and smile over their discovery of how the quilter (me) "made do" and carried on ;-)

This has happened to me too. Its so frustrating but it's sounds like you have options. Dont be discouraged.

You could always make the black into pillows to go with the quilt, and say you meant for it to be that way. :D My longarmer here in town, just called me this weekend, I had to go pick up one I dropped off for her, she said she needs 6 more inches sewn to the back, just in case. So I have to add more to mine too! There is no way to chop mine off with the design that is on the front.

Ooh, the pillow idea is a good one. :) I'll bet if you sewed some more on the backing, and then finished the quilting on the regular machine, no one would notice unless you told them. I'm sure it'll be gorgeous no matter what!