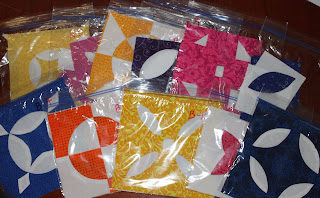 I keep saying that having thing prepared and ready to go is the key for getting lots of applique done.  Today the entire gang was gone to a Lego Robotics tournament, leaving me the day to do with as I chose.  Though it would have been fun to actually sew some Dear Jane blocks, the computer with my DJ software is the same one that has Lego software and was gone all day to the tournament.  Paper piecing is much easier when you can print out the templates, so I decided instead to work on applique preparation.  11 blocks are all ready to go!
I loved using the tutorials at That Quilt.  So handy to have a quick visual and measurements.  I used the color map from my Rainbow Jane tab and searched for blocks that could be prepped to hand sew later.  Aren't the rainbow brights happy and cheerful?  I think I am going to like this quilt.
For now, there is a pie in the oven and a roast in the crockpot.  The kids have all gotten back from the tournament, so a nice family night sounds like the plan.
Posted by scraphappy at 5:13 PM

Looking good so far, even if they are in the prep stage. So bright and cheery! I will start to gather my fabrics together, and check out the book to see which ones are easy and which ones are harder, so I don't end up with all the harder ones at the end.

I just love it when I have a day to myself to get my projects done. I am impressed that you had dinner cooking also.

Yes, preparation is definitely the key. I cut out a pile of hexagons but they didn't last long, especially after DD started tacking some for me! Your fabric choices for the Dear Jane blocks look fabulous.

Your little package look good. Glad you had a good day to sew or prepare to sew day. I hope to steel an evening or two soon for myself. I am out at dog trials for the weekend. So glad to hear we have more Rainbow scrap challenge but I have nothing to post today, maybe next week.

I love those bright happy colors!

Looks like you took advantage of the opportunity and got a lot done. Good for you. The rainbow colors are so cheerful. Love it.

You certainly managed to make good use of your day. So often when I have a day to myself I fritter it away and achieve very little.

I should imagine family nights in your home are a very warm and lively affair.

Hope you enjoyed your day 'off'. :) You made good use of your day, that's for sure!

Great way to spend some time!