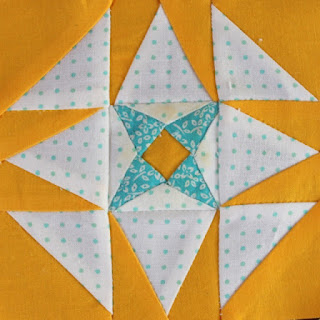 This is Midget Block 91 which is called Sea Star.  In thinking of it as a star I kept trying to make the yellow parts turn into the star points.  I couldn't figure out why the triangles in the corner were going the wrong way until I had an aha moment and realized that the background was actually the star part.  The middle part was hand pieced ages ago when I was looking for something to do in the car.  I just stuck it back into the page protector waiting until the turn came for block 90. 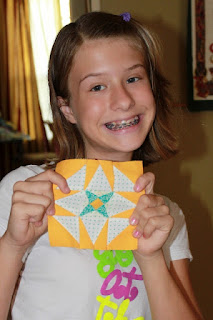 Anna volunteered to hold the block, and unlike her father with the block from last Tuesday, she knew it wasn't a police line-up.  Though this post will appear in December, it is still October here and I am frantically trying to finish up these little blocks before the end of the year.  As soon as I run out of Tiny Tuesdays in 2012 I'll add in some Mini Mondays until all the blocks are done.  144 is the magic number I think.  12 by 12.  I think it will work.
Posted by scraphappy at 6:30 AM

A sunny smile for a sunny coloured block!

Very nice. Love her smile in this picture.

A block with nice movement : )
Sweet smile on this model. She's a keeper.
144 blocks. Will be a very pretty quilt. Looking forward to seeing rainbow "Dear Jane" block series in 2013.
Garden Maze block was most awesome with all those fussy cut tiny animal fabric pieces. Wow!

Love the cheddar and Anna's smile!

What a happy smile she is wearing today. Block looks great too!