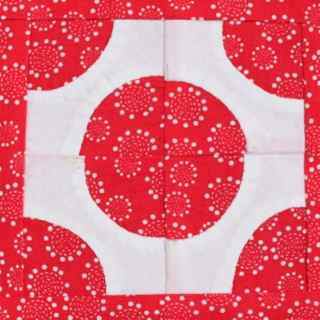 The applique bits were done quite a while ago for this one, all that remained was sewing the squares together and sashing them out a bit.  The edges didn't quite end up even when I sewed the four patch together, so I ripped it out and tried again.  It didn't end up any better.  Then as I was ironing them, the iron left dark marks on the edges.  So I washed it in the sink and tried again.  Then as I ironed it again, the same thing happened!  I guess I would have been better off letting it be the first time. 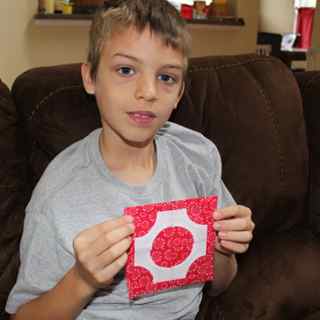 Ryan is my happy block holder today, he was nice enough to take a break from his video game to pose.    Block C11 is crossed off the list.  Next?
Posted by scraphappy at 6:30 AM

Looks good to me - some things are just meant to be!

Adorable--the block and the model!

Looks great to me. You are getting so many of these done so quickly.

Some days it just doesn't pay to pick up the needle and thread :*) It turned okay from here!