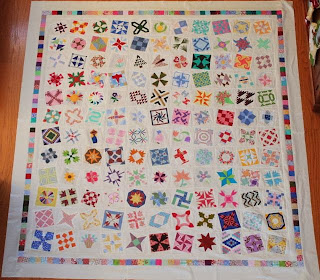 I just finished putting the borders on the Midget Block Quilt!!!!!!!  Hard to believe it took me almost a year to figure out 2 inch squares and background strips.  It measures 80 by 86 inches now, which seems like a nice size.  I'm not telling you because you need to know, I'm telling myself because I don't have anything that will work for a backing.  I'm going to load the top on the frame anyway though, before it gets wrinkled, and I'll want to know later how big to make the backing fabric.  This one will be an experiment in machine quilting.  The little Dear Jane tried to be machine quilted and failed.  I'm hoping this little guy will do better and then I will be up for the BIG Rainbow Jane. 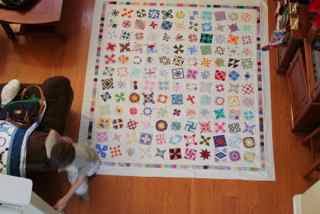 I laid the quilt out in the family room so that I could go up to the bridge on the second story to get a good photo.  There is Ryan walking around the quilt and Kurt's Christmas stocking poking out on the other side.  Getting decent pictures is complicated around here!
Speaking of complicated, the quilting room (guest bedroom) is getting a good clean out to make room for a bit of machine quilting time.  I wonder if there is still time tonight to pop out for a suitable backing fabric?  Maybe not.
Today we celebrated the first official day of vacation with trips to the grocery store and the dentist.  Exciting stuff, right?  Nothing on the agenda for tomorrow though, other than Christmas eve of course.  Maybe I'll be able to sneak away for another Dear Jane block or two?  Maybe.
Posted by scraphappy at 5:56 PM

Love the border - it was worth the wait. Merry Christmas!

Love it!!! The border is perfect and looks just fantastic.

The border makes a happy quilt even happier!

that border worked out great. This is really a work of art.

Beautiful! Sometimes it pays to put a quilt top away for a while until inspiration hits. Congrats.

Congratulations on such a big finish!!! As I suspected, that border is perfect for those wonderful blocks :*)

What a fabulous quilt!!

Merry Christmas to you!!!

Woohoo! I'm so glad you're getting some well-earned sewing time.

Angela -- you are amazing and inspirational! Your midget rendition is beautiful, and truly an heirloom. Wonderful quilt.

That looks great as the border. Congrats on the finish. Hope you were able to get out and get a backing.... splurge and get the 104 inch one so you don't need to piece anything! Enjoy your Christmas eve and Christmas holiday.
The kids and I get to go work at the store this morning. Seems someone is getting an Egg and challenger table for Christmas and G needs to deliver it this morning. =)

This turned out beautifully! I love it! Congratulations on a finish :D