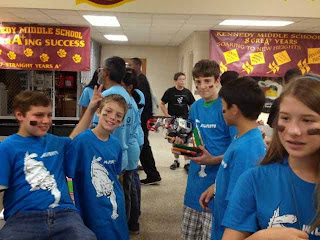 Yesterday was jam packed with the Lego Tournament.  Ryan and Anna are both on the team together this year along with four other boys from the school.  Sydney had a birthday party in the middle so it was interspersed with lots of driving around. 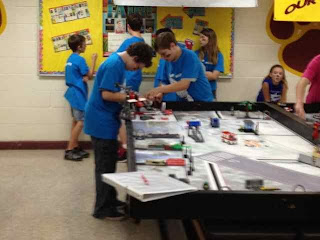 They all took turns running the robot during each of the three matches.  Everything went just as planned, and our high score of 246 points earned us a trophy for the robot challenge.  There are 3 other categories though for technical design, presentation of research and core values. 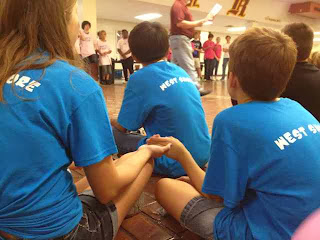 In the end we ended up as one of three teams who qualified to go on to the regional tournament in February.  We have already signed up for another qualifying tournament in January, so that one will be good practice to get all of the parts in tip top shape.
It was a lot of fun, but such a long and loud day!   Academic team will have their district tournament tomorrow.  Looks like the last couple of weeks before winter break will be busy busy busy.  The girls want to see Frozen today and the boys are off for an afternoon on Dungeons and Dragon.   Sewing?  Still hasn't popped up to the top of the list.
Posted by scraphappy at 8:28 AM

Congratulations...I bet they had a blast!

Congrats on the trophy! I've had the same problem, too much going on to find the time to sew.