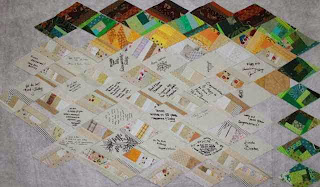 I've been putting off serious sewing until my machine comes home again.  Since that hasn't happened yet, I decided to do some crumb sewing today.  When we went to North Carolina over Labor Day weekend for my in-laws 50th wedding anniversary, I brought along some fabric squares and collected signatures and well-wishes.  Kurt wants me to get the quilt done sooner rather than later now that his mom has started chemotherapy.  We have some pictures as well, from the party as well as from the wedding to add into the quilt.  It is still evolving, but at least I made a start. 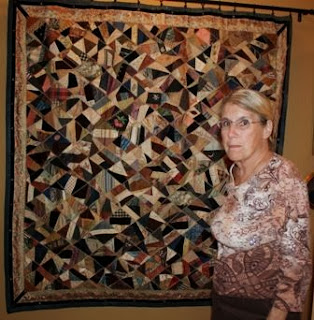 This was the original inspiration quilt.  It is an antique that Bonny got when her mom passed away several years ago.  She isn't sure who made the quilt originally, but it has been passed through the family for many years.
Posted by scraphappy at 6:58 PM

Looks like you got a good start on the crumb quilt. I hope your machine comes home soon!