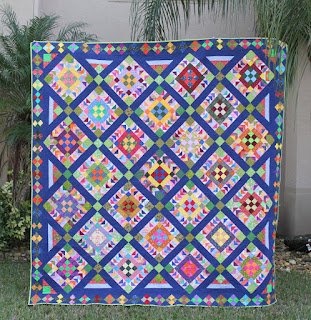 I was determined to finish the binding for Hawaii Sunset 1845 before the new year started.  We were gone on a cruise last week, and I seriously considered taking it along.  I didn't though, and so settled in for a marathon of binding sewing as soon as we got home and the laundry was underway. 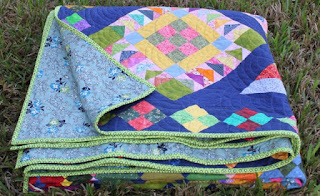 I worked through Star Wars IV, V and VI, but it still wasn't done!  We did dinner and a movie with the kids for New Year's Eve, and there was still more binding to go! 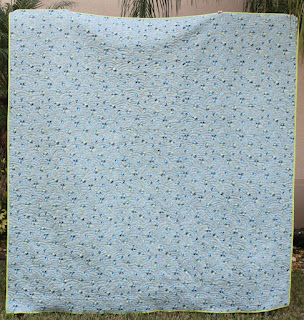 Finally, at the end of Star Wars Episode I, I triuphantly reached the last corner in time to call this an official finish for 2015.
This pattern was originally published in Quilter's Newsletter in the February/March issue for 2010.  I don't subscribe to the magazine, but I saw several people making the quilt, starting with Jo of Jo's Country Junction in June of 2012.  Fortunately, I was able to find a digital download and joined into the fun.  It is quilted with freehand Baptist Fans and backed with a soft steel blue floral that I got off the clearance shelf.  Lime green binding
Posted by scraphappy at 9:57 AM

Yay you!!!! That is a really stunning quilt as well!! We might have watched a stars wars or two here as well... great minds eh? Happy New Year!!

Yay!!!! What a great way to ring out the old year -- a day spent quilting!

Congrats on the stunning finish. I remember when the pattern was published and when you started it. This one is in my "too make someday file".

Great finish! I hope to make this quilt sometime soon - I love it.

Beautiful bright and cherry quilt. Congrats on the finish.

Great way to finish the year! It's so pretty, bright and happy.

A Star Wars movie marathon - how fun! We went to the first movie when it first came out in 1977 and have been fans ever since. Hubbie and I went to the new movie last week and then he went again with the sons-in-law last Saturday.

Happy New Year! Can't wait to have some fun with RSC16.

OMG, that is so amazing! What a gorgeous quilt!!! Your colors are just perfect. Congrats on getting it done before midnight - you certainly had a banner year,

Now, how long are you going to keep us in agony before announcing our first RSC color for January?!? LOL.

It's LOVELY! Mine hangs on my living room wall and I never tire of it.

Clearly the Force was with you :)

It's a gorgeous quilt !

Just stunning! Nice way to finish out the year!

Very nice quilt, you did a great job.
Btw, have you considered amending your blog pages (layout) so that the photos came out larger?

It is beautiful. Congratulations on your finish!

It's spectacular!! So happy you finished it!

Well done on your last finish and a great looking quilt - all good wishes for 2016 :)

Beautiful, beautiful finish Angela!!! Mine's still in a box. I'd love to work on it this year and maybe even finish it up. Yours truly inspires me.

An absolutely stunning quilt, congratulations on the completion of it.?

Such a cheery quilt to end the year on! I love all the color!

What a great way to end the year.. In time for a new start..

this is a real beauty

thanks for the beautiful pattern. I don't usually join a bom but would love to use up some of my scraps so I'm love to quilt along. tx.