The last day of "vacation" was so busy!  Technically it was a teacher workday, we were allowed to work off campus though, so I started the day with a trip to the 114 acres to check on the gopher tortoise burrows.  I met Ryan there from the Costa Rica trip and we marked about a third of the burrows.  Almost done with the GPS tags!  So that was 6,000 steps all before 9:30.  My car wouldn't start, so I had to get a jump and switch cars before heading down to school to set up my 28 new chrome books!  Our school got a grant and I was one of the lucky teachers chosen to get a cart full of computers for my classroom.  Well that took SO long.  Unpacking, inventory, paperwork, stickers, chords, Kurt came in to help and it was still 4 hours worth of work.
I thought about coming home and collapsing, but managed to remain upright long enough to go into the sewing room to get a tiny bit of work done.  We had an early dinner so that Ryan could go to robotics, which was cancelled.  Bummer.  But now Kurt and I are settled in to watch Star Wars Episode II with a little hand work. 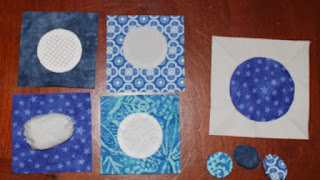 It started simply enough with the goal of an applique circle for day 4.  Then I wondered what it would look like to applique the background fabric removed from the back of the block.  Then there was one more circle from behind that circle.  I think that will be the smallest circle that I do.  I'm not promising anything though.  Maybe I'll do enough of the smaller circles for a border?  Maybe not.  Tomorrow is back to school again.  I guess lesson plans would be a good thing.  And so it never ends.
Posted by scraphappy at 9:12 PM

I have chosen not to trim away behind my circles. Then I am not tempted by the scrap!

Sounds like it was a full workday. Hope you enjoyed your slow stitching this evening. I binge watched Star Wars 4, 5 and 6 this weekend.

I could probably make another orange peel from trimming behind mine, but I'm not even going to think about it.
As soon as I can stop thinking about it...

Teacher work days are always the longest and I come home so exhausted. Good for you for going into the sewing room. I crashed on the couch with a trashy, humorous book, did not make dinner, barely made it into the shower, and I am still avoiding drying my hair by hanging on my computer instead. I am so jealous of all your Chrome books!

Very cool way to utilize all the fabric!

Your mind is always busy! Love the circle progression. Clever!

I love it! I still haven't jumped on board for the circle a day but I am really considering it.