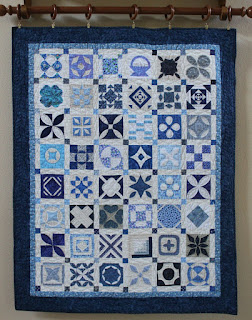 I can't be sure when I started these blocks.  It was after we moved to this house 10 years ago, but well before I started this blog 5 years ago.  I remember taking blocks along to hand sew when Sydney was taking karate at age 3 and when Ryan was going to chess tournaments at age 6.  The last blocks were finished in August of 2010.  It was going to be a full quilt, but I got sidetracked with Midgets before starting a rainbow version of Jane.  The center blocks are all done for that one and I am actively working on the border blocks again after a break during the rainbow sampler quilts of 2014 and 2015. 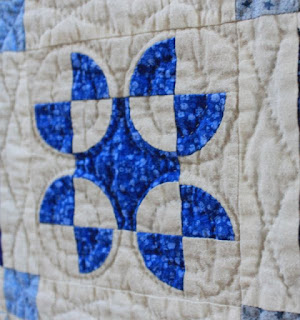 Jane is hand quilted of course, with individual designs chosen to accent each block. 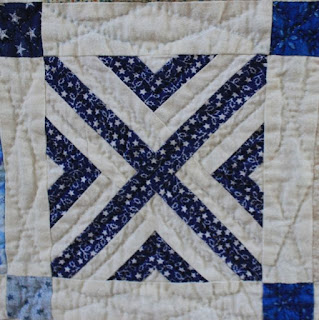 It took a bit longer than I expected, and she was taken along on many long car trips and family outings. 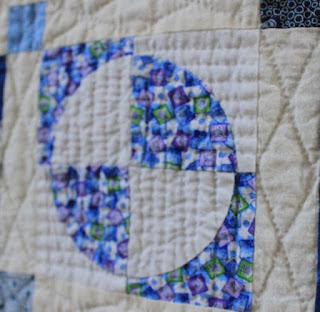 After all that time, she needed a good wash, which I did in the bathtub this week. 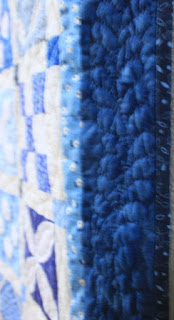 The border doesn't show up all that well, I guess the thread matched a little better than I thought. 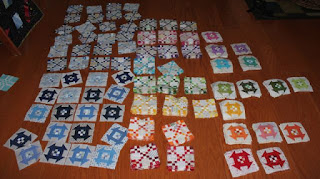 I spent yesterday working on the OMG Churn Dash quilt.  I had pinned all the blocks together in groups of 10.  The quilt top is all sketched out of graph paper and I did a count of how many of each color it will need. 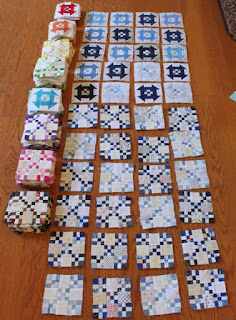 So all the blue blocks are officially done! I needed 20 of the O blocks and 22 of the X blocks.  I worked on a few other colors as well in a marathon session of sewing that went into the wee hours this morning.  Much digging through the scrap bins occurred as I had to find more 1 inch strips to add to the nine patch pile along with 2 inch strips for the churn dash blocks.  Today will be a nice calm day of catching up on my circles and grading some essays for school.  I will link up with Kathy for Slow Stitching Sunday as well as Cynthia for Oh Scrap!.
Posted by scraphappy at 8:40 AM

DJ is beautiful and I love how you are hanging her! So fun to watch those itty bitty blocks coming together. So close to becoming a quilt. Enjoy the lazy day and stay warm... hopefully we get out of the 40's today unlike yesterday.

Dear Jane is just gorgeous! Have a wonderful Sunday!

Such a beautiful quilt; it looks like it graced Jane's bed!
Nice to pull out all the UFO's and get a plan going!

Wonderful to see your Blue and white Dear Jane. I am quietly working on mine.

Every time I see a Dear Jane quilt (or even just a stack of DJ blocks) part of me goes 'Oh, wouldn't that be fun?', but then another part of me starts saying 'Nope. Nope nope nope. Just nope.' So maybe not.
But on the other hand, that OMG just make me go 'OMG I want to make that!' and I don't hear any negatives...
I love your Dear Jane and am interested in seeing the rainbow one! And I'm OMGing at your OMGs!

So nice to see Blue Jane (Jane a la Bleue?) in all her finished glory!

Both are beautiful! If I had a quilt from 10 years ago, I think I would have a hard time finishing it...let alone even liking it! Yours is amazing and worth a grand finish!

Who cares how long Dear Jane took, she was worth waiting for. So glad to hand quilted her. Just gorgeous! Your tenacity is paying off!

Scrap heaven...your blocks look amazing. Can't wait to see them in a top!
Dear Jane is a lot of work, no matter how long it takes it is worth the wait!

Your blue Dear Jane / Dear blue Jane is stunning. The fact that you hand quilted it makes it even more special; a family heirloom for sure!. Your boundless skills never cease to amaze me! Have a lovely Sunday.

Both quilts are amazing. Churn dash is a favorite of mine so I am looking forward to seeing that one assembled. Thanks for linking up with Oh Scrap!

You make the most beautiful quilts! I've never made an all blue and white quilt, but I sure want to after see yours. Thanks for the inspiration!

I absolutely love the hand quilting on your Dear Jane. The OMG certainly deserves an OMG, that is going to be a fabulous quilt. Will you hand quilt is also?

everything looks great! I'm trying to be patient and wait for Feb 1st as I want to start the next color!

I hope to add more hand quilting back into my work - use to be the only way I finished them AND then the new machine. Your OMG is just stunning.

Well done! My Omigosh blocks need a sorting and airing, as I have no idea how many blocks I have!

Congrats on finishing Jane... it's an amazing accomplishment!

Dear Jane looks wonderful! Congrats on the finish! OMGosh is going to be stunning!

Isn't it lucky that fabric doesn't have a use by date or we'd all be in big trouble!

a great Dear Jane quilt, I have the book but is way over my head though did manage 2 of the simple blocks as Jennie Rayment a very well known quilter has requested blocjks as she is going to make the quilt on tv in march, think she will be in for a shock as I am sure she will get hundreds of blocks to sew together!

Lovely finish on your blue DJ. Such an amazing accomplishment.

Your quilt is beautiful! Congratulations on a finish.

That rainbow quilt is going to be so gorgeously scrappy!

Your blue and white Jane is gorgeous! The scrappy churn dash and the nine patches are going to make a very colorful quilt. You've really been moving along on projects this year.