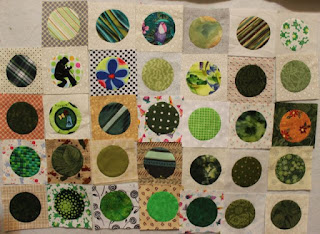 It feels oh so good to be home again, but wow do I need a vacation!   After spending 8 hours each day grading AP essays, I thought it would be so relaxing to be home again.  Somehow, instead of getting back home to chill, I have switched into high gear.  Monday was laundry and unpacking, Tuesday I shampooed all the carpets, Yesterday was the scrubbing of the tile.  Today was meeting with a roofer about a leak and getting a cracked windshield repaired.  On the up side though, the house is sparkling clean, and I will feel no guilt about spending some time sewing.  I just have to put everything back together in the sewing room first. 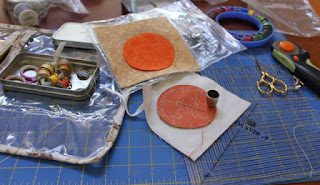 There was plenty of time in airports and hotel rooms to stitch away at circles.  August is done, and September is well under way.  I can see a the end of this project starting to appear.  Not that I want to rush it of course, but it is a little bit embarrassing to be almost a year behind on a block of the day quilt.

Posted by scraphappy at 2:25 PM

Here's to lots of enjoyable stitching time for the next several days!

You certainly have been busy since coming home. The circles are looking great.

Such wonderful green circles and orange ready to go. You'll be caught up in no time. Enjoy the next few days organizing your sewing area and getting down to the business of stitching.

Wow!! Look at you go - if you wanted to make another house sparkle..... mine is available - ha ha - love your circles!! Enjoy!!

Welcome back home, my friend. I am sure you will make great quilts!

IF there was a chance that I might tackle a Quilty 365 project, I could easily imagine myself being a year behind!! Point of reference, I am STILL working on my RSC 15 project!!!

Your week made me reach for the Tylenol, but I'd love your clean house!