I've had more energy to stitch in the evenings since school ended.  Funny how not having a job opens up so much more free time!  It seemed like a good idea to take stock on Leap Year and figure out just how much more stitching was left.  Leap Year was a daily quilt along from 2016, so finishing it up sooner rather than later seems like a good idea.  So I started with January, February, March and April.  They were already finished and stitched together.  May, June and July had all the blocks done, but they just needed to be sewn together.  That was easy enough. I had to look back at a calendar of course and remember how many days in each month and which day was the first.   May was actually a bit tricky, with 31 days and the first on a weekend, it tried to stretch into 6 weeks.  I think I'll just add the first onto the last day of April to keep everything symmetrical.  Symmetry is nice in quilts after all. 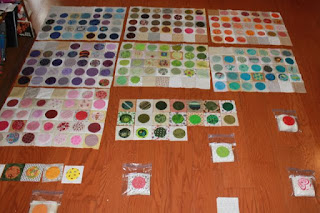 After that I found that all of the circles were cut out, and most of them had already been prepped with spray starch and a gathering stitch.  I sorted through the rest, cut out some more background squares and now have everything all ready so that they just need the final hand stitching.  That will be perfect for rainy Florida afternoons and evening movies with the kids.
Before I get too carried away with stitching though, I'm off to see what other slow stitching people have going on at Kathy's Quilts.
Posted by scraphappy at 6:00 AM

Your making great progress!! It's going to be a beautiful quilt!

Love how you are doing the colors like a calendar and representing each day. Yes, being a teacher definitely has it's quilty advantages! Enjoy your summer vacation!

Interesting quilt. A neat idea for a quilt design, and like you, I also like symmetry. Enjoy your slow sewing today.

Way to tame that beast of a project!! I wasn't in a position to do the Quilty 365 quilt, but may conquer it as some point. Yours is going to be gorgeous!!

Love how your circles are coming along. Enjoy the summer vacation.

Perfect timing...I was wondering what happened with the circles. I have been following along!Good job so far!

I love your plan for your circles! That's going to be a pretty and interesting quilt!

Your circles are so fun!! It is really going to be a cheery quilt. I know the feeling about work and sewing. I have been working extra hours for the past several weeks! Back to normal next week! Yay!!

I love these circles. I am sure it will be a beautiful quilt.

I love the circle calendar!

Enjoy all the stitching that you can get done on summer vacation. Your circles are looking great.

Yeah - another wonderful circle quilt in the making!

It looks like you just might get this one finished this year. You really have done all the hard work already. They look nice.

I'm trying to get my version of the 365 quilt done too. All it lacks is binding at this point!

I enjoy reading all the quilting that you post on your blog. Creative and inspiring. As a retired teacher here in Florida too, I know how busy your days are and how the summer is a great time to rejuvenate. I read on your most recent post that you have many of the circles spray starched. Can you share the benefits of this method and your process? Thank you . D. Weeks (dweeks4602@gmail.com) aka Momma Llama

I am a retired teacher but remember well the boundless joy of summer break! I did the Quilty 365 last year...made it to 180 hand sewn circles and eventually made a rather large wall hanging. Actually I am missing making those circles, though, of course, I am busy stitching. Enjoy your summer stitching time.

Looks like you've got a finish all mapped out. Enjoy your summer break. Hope you can find time for lots of stitching.