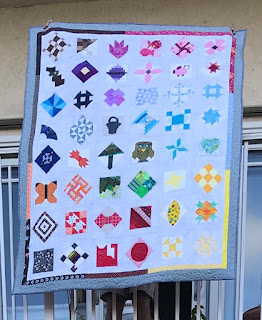 The Tiny Tuesday Rainbow Scrap Challenge Sampler from 2019 is officially done!  This was such a fun quilt to make.   Each Tuesday a new block was offered, either by me or by one of the Rainbow Scrap Challenge participants.   Had I known when I started that 2019 was going to be the year of the big move, I might have planned differently.   It is such a fun collection though, and I love remembering where all the blocks came from. 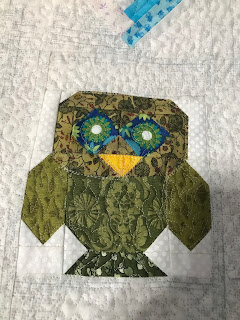 I love the owl block.  His eyes just crack me up! Sally designed this one, and the pig block as well.  Both are so sweet.  You should check out her tutorial page if you enjoy animal blocks. 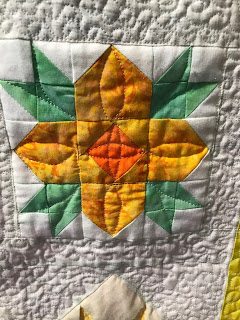 There were several flower blocks, but I feel like I could make an entire quilt out of this one.  Mari designed it.  Why are other people's blocks so much more fun than my own? 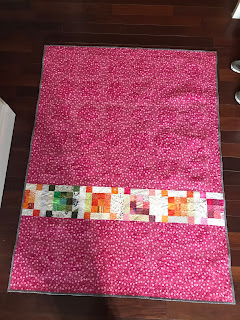 I had saved a strip of framed nine patches for the back of that quilt, but forgot to use them.  They found a nice home here though.  I do enjoy pieced backings so much. 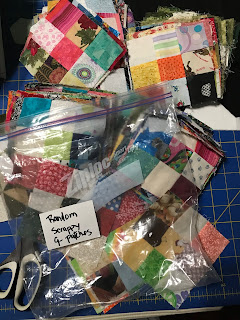 After finishing off so many quilts lately, I had the urge to start something new.  I resisted the urge though, and instead decided to put some already made blocks to use.   What is a girl to do with a bag labelled "Random Scrappy 9-patches"? 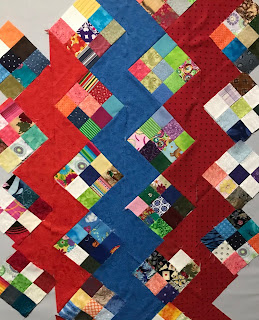 I think I will put them together with a streak of lightning setting in alternating rows of red and blue.  I showed it to my husband, and his response was, "Wow, there is a lot going on in that quilt".  I don't think he meant it as a complement.  Maybe I'll play with the colors a bit.

Posted by scraphappy at 1:45 PM

Love the random scrappy 9-patch. I'd like to make using all my 2.5 inch squares. Is it okay to copy? Thanks for idea.

Your Tiny Tuesday is just wonderful, Angela! I love the same thing as you do about that quilt - all those fun and unique blocks. Congratulations on your finish!

I finished my Tiny Tuesday just last week. Thanks for a fun sew a long.

What a wonderful finish, Angela! Tiny Tuesday was one of the most fun quilts that I have put together and yours is fabulous too! Tuesdays were so much fun during 2019 and I looked forward to the block release each week. Great job on running the RSC Tiny Tuesday quilt and congratulations on a great finish!

Love your Tiny Tuesday quilt! So fun with all those different blocks. Great way of using the 9-patch blocks.

Congrats on finishing your Tiny Tuesday quilt! It turned out beautifully! I bet it’s nice to be knocking out those UFO’s!

LOVE your Tiny Tuesday finish. That owl is still adorable! Your husband's comment is what my husband says often -- Wow, that quilt has a lot going on. That's okay too.

Nice work on the Tiny Tuesday finish. I have done the RSC once when I made a Jack's Chain quilt and thoroughly enjoyed the color challenge each month. I need to do this again :)

Oh, I love your Tiny Tuesday! It turned out so well. I really like your scrappy inner border. Congratulations on a great finish and making a lot of progress on finishing your UFOs.

Love how your Tiny Tuesday quilt turned out! I still have my blocks; I was thinking of making more and going for a larger quilt. I still need to think about this plan some more...