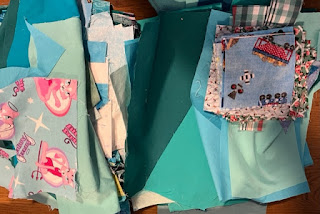 What a long strange week it has been.   On Monday, the older of my two daughters found out that she had been accepted into graduate school at Virginia Tech.   She was so excited!   Then on Tuesday she learned that she was also in at Rhode Island University.   Now she has to choose!  So we hastily scheduled a trip to Rhode Island to get a feel for the campus. 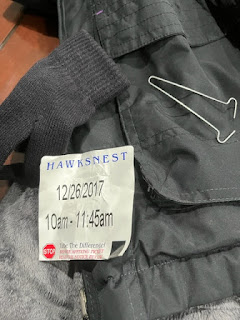 By Wednesday we had plane tickets, a rental car and a hotel along with lab tours, lunches and meetings for Anna to get check out the program.  I had sub plans and filled out leave paperwork and told my kids to be good while I was gone.  I even found my coat which hasn't been worn since 2017.  In normal times there would have been in person interviews, but given the state of Covid, everything was online.  Then we found out that there was going to be a big snow storm moving into New England and everything was cancelled.   Poof!  All that planning for nothing.   So now the same plans are now rescheduled for next weekend and Anna was able to do a Zoom meeting with two of the professors she would be studying under at RI.  We have a driving trip planned for Virginia over spring break.   Kurt and I have been shopping for houses or land outside of DC, so we will combine both trips. Sydney, the younger daughter, is coming along as well so we will throw in a theme park visit for her.
Then, just as things were settling down again, Sydney has found out that she is accepted to the University of Florida, which is now her first choice of colleges.  Fortunately, she has already been on tours and seen the campus, so she is excited and happy. 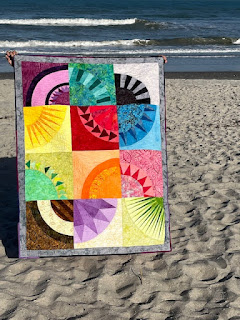 So I have an unexpected weekend at home to FINALLY sew some of my aqua scraps.   The quilting frame was set up for three weekends in a row and I focused hard on getting 10 flimsies quilted.  So far only one has been completely finished with binding sewn, but I will share each as a I finish the last stage.  New York Beauty was a quilt of my own design.  I sketched each of the blocks out and then charted them onto freezer paper with a compass, protractor and rulers.   The fabrics combined batiks with my favorite hand dyes from Vicki Welsh.  I started in 2014 and then finished it during the lockdown of 2020.   It was first on the list because I took it in for a faculty and staff art show at school.  So now the dog has been walked, the husband is off playing tennis and I am ready to play with some scraps!  Misterlinky is below, please share your own scrappy progress.
Posted by scraphappy at 8:20 AM

A busy time for your family! So disappointing to have that trip all planned and then the weather brings it all to a screeching halt. I bet you're really looking forward to Spring Break, though! Have a wonderful weekend, Angela!

Oh, my... What a week, Angela!! FYI... Without a post title, I wasn't able to provide my readers with a direct link to this week's RSC. Congrats of Sydney and best of luck with Anna's grad school decision!!

How very exciting for her! Oh to be young again! :)

Wow, that's a week! Congratulations to your daughter. It's great to have so many choices. Hope you enjoy your trip to RI and she chooses a great school while you get a little relaxation. Can't wait to see your finished quilts!

And life goes on and suddenly your kids are building there own lives and nothing is the same!sending you good wishes and that each daughter is content and happy in their decision!

congratulations to your girls on their schools. So you are thinking of moving to Virginia from Florida? Or did I misunderstand?

The college decisions must be very exciting, in spite of the ever changing campus visit plans. My oldest chose her college because it was the only in-state school with her major. My youngest had no idea what she wanted to major in but knew which school she wanted to attend. She had decisions to make for grad school too, between a couple of OT programs.

Wow! Your New York beauty quilt is stunning! And such a perfect setting for the photo. Hope your new plans work out well. Good luck!

Congratulations for Anna and Sydney.
New York Beauty is wonderful at the beach, Angela, great shot.

Yellow and gold for March! Ready!!
Have a great and peaceful week ;)

So much excitement - good luck to all of you!
(My niece just found out she has been accepted at UF, as well. Go Gators!)

Congratulations to your daughters. Your NYB quilt is gorgeous.

What a crazy week you had! Congrats to both girls! Sounds like you are planning to move north? Good luck on spring break exploring schools, houses and have fun. NYB turned out beautifully.

You had a crazy week!!
But you got so many quilt quilted!!! amazing!!
Hope all settles down for you.

A huge congratulations to Sydney and good luck with her further university career. What wonderful choices she had!Also good luck to you on the land/house search. Exciting times in your family. Oh and happy stitching as well!

I am not having much luck with Mister Linky and figuring out how to put my link in correctly although I have been trying to do it from my phone. Next time I will try on a land computer. I have been enjoying making Aqua and Teal ninepatches and I am dreaming about how I will do the setting. You can visit me at
https://quiltedthrifted2.files.wordpress.com/2022/02/img_2811.jpg?w=1024
Thank you, Theresa

Such a beautiful quilt!

Such a lot going on at your place, exciting times! I love all the bright colour in your New York Beauty.

Hi,
What a busy week. Good luck to the girls on
getting accented to college. Love picture of
the quilt at the beach...so colorful.
Have a great day!

Wow, that is some crazy stuff. Exciting times, though. Congrats to your girls. Thanks for keeping us motivated with RSC2022!