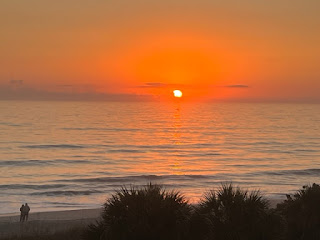 It was a beautiful sunrise and the weather is much warmer. 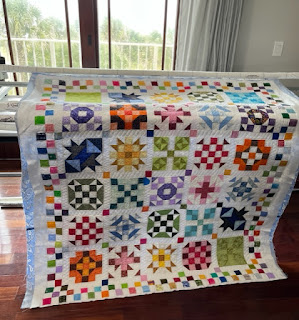 Squared Away was the RSC challenge quilt from 2018 which was a collaboration project with Mari, The Academic Quilter.   I did some detail quilting on the sashing and cornerstone areas and just meandered in the blocks.  I'm thinking that a bright pop of yellow would make a nice binding for it.   There is a blue bandana print on the back. 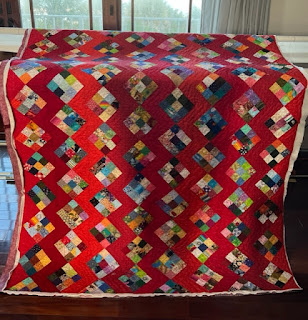 Then Streak of Lightning came next.   It is just random leader and ender nine patches with setting triangles offset to form the zig zag pattern.   I loaded it sideways and put long wavy lines in the red with loops in the blocks.   I save extra blue from the Squared Away backing to bind this one. 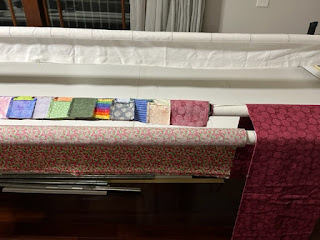 Then I had just enough steam to load up the next quilt while we watched winter Olympics together as a family.   It sat ignored all week as school consumed everything.  Sydney was stressed getting ready for science fair which was yesterday.  Anna was stressed getting ready for her second interview with Virginia Teach which was also yesterday.  I was stressed with difficult students, parents and others at school.  On Wednesday I wasn't sure I was going to make it.  By Friday it was looking up though, with Admin support in yet another parent conference, Anna feeling good about her interview day, and Sydney confident after science fair judging.   She has a packed day with Lacrosse, work and awards tonight.  I'm wide open until the awards though, so Chopsticks will be first up.   I'm thinking of some fairly geometric alternating wavy patterns.
I hope you have some sewing to look forward to this weekend. Mr. Link is below, please share your progress and see what everyone else has been up to.
Posted by scraphappy at 7:51 AM

you are making fast work out of your quilt tops. How many do you plan to quilt before you pack the machine away again?

So glad everyone made it through that stressful week! You're making some great quilting progress. I love seeing your Squared Away, and Streak of Lightning is a wonderful quilt with its red background and scrappy 9 patches. Cheers for the weekend!

Your quilts are both lovely. The first one is so bright and happy! Love the red background fabric in the 2nd quilt. Happy stitching!

Love your quilt. So pretty.

I'm so glad you had some support from Admin. Conferences with the parents of "difficult" kids were usually very stressful. Most of the kids who caused me the most headaches over the years learned their attitudes at home from similar parents.

Love how your quilts are turning out. Streak of Lightning is especially fun.

Streaks of Lightning is a fantastic use of scrappy nine patches! I love it!

So sorry to hear about your awful week, especially the trials at school. Sometimes adulting is no fun at all. Glad thing s are looking up now for everyone. Your two quilts are looking awesome!

Good to read that your week ended more upbeat. My special ed teacher daughter says the kids are great. . .it's the parents that are the challenges. I hope the remainder of the teaching year goes better for you. How terrific you were able to quilt some tops. Both projects are spectacular as was your sunrise photo! WOW!

So glad you've been finding time for quilting up those beauties! Cheers for a stress-free weekend!

What a great, productive weekend! Now to binding for all those happy quilt finishes!

So glad your week got better as it went along!
Hope it's a fully restorative weekend :)

You had a busy week!
Your Squared Away looks great - and now I'm wondering where on earth I stashed all the blocks for mine...

Love your squared away lay-out and checkered borders.

Hi Angela, I always enjoy seeing your beautiful sunrise/sunset photos.
Must admit I'm suffering from sewing machine withdrawal symtons. I'm enjoying seeing what everyone else has been getting up to with their RSC projects. As for me, although I am having fun on our 3 week caravan trip around our beautiful country, I'm not complaining, really, I'll be pleased to return home next week to check out my sewing room, fabric, all those projects waiting patiently for me.

Oh my. So sorry your week was so stressful. As a parent watching the teachers and all the extra effort they put in for the kids- you really are appreciated for all that you do for the students. Hope the science fair and job interview went well for the girls. Wishing you a fun filled day playing with fabrics.

Congrats on getting so much quilting done. You really stuck with it. I enjoyed following along in instagram. Ugh. I feel your stress on school-related issues. I know in the end it will all work itself out, but when I'm in the middle of it I don't get a warm, fuzzy feeling. Yesterday was our annual IEP meeting. Ick. Our son is transitioning from middle school to high school. Glad that meeting is done.

Can you explain how you did the off set 9 patches in Streak of Lightning? I love scrappy quilts and this is just beautiful!