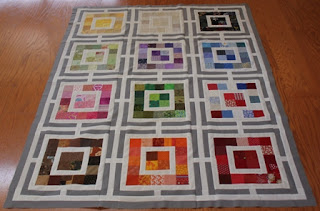 After having school off yesterday and getting to spend quite a bit of time in the sewing room, I felt very spoiled to have everyone out of the house all day today.  First up was finishing off the flimsy for Scrapphappy Squares.  I'm so thankful for the design inspiration from Marlene that sent me down the Garden Rail path with the setting on this one. 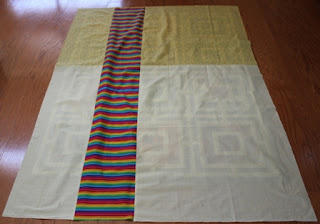 Then it needed a back of course. I had some nice black and rainbow fabric, but as I'll quilt it in white thread, I thought this soft yellow would work better.  I did add an extra rainbow stripe from fabric I had auditioned for the sashes.  Loading it on the frame seemed easier than putting it away and having to iron it all again later.   Though I started the first row of quilting, I was in more of a piecing mood and sewed up the extra half blocks that the Rainbow Crumbs have been waiting for.  I also put up the Cheddar bowties on the newly liberated wall space from the quilt on the frame.  Still having the house to myself, I started in on some more crumb blocks to finish off the rows.  I'm about done with the black and just started on the brown.  I'm still debating on the white, I guess it will depend on the final measurements. 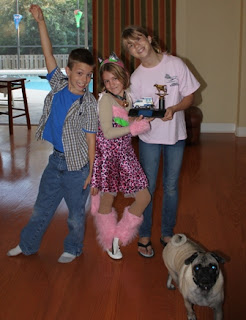 I was in the midst of my little crumb explosion when the gang came home with the EXCITING news that they qualified to go to the regional Lego Robotics competition during their tournament today. It was supposed to be just an early practice round but I guess it all went so well that they took second for the day. Most exciting of all, their robot got the top prize for design! Much happy dancing was done along with trophy posing and celebratory woohooing.
Posted by scraphappy at 6:39 PM

Years ago...one of my son's did the Lego Robotic challenge. It was a lot of fun...in a very geeky way. Congrats to the team! I now have all the Legos in storage...sometimes I wish we were all still playing with them!

Oh girl....I don't know which picture I like more: That flimsy or the kiddos! I guess they both get my vote as the best picture. :0)

Sounds like a good day all round. Love the quilt top, it's turned out really well

Congratulations to your family on their win - how exciting!

Your quilt top turned out great! Congrats to your kids!! My sons played with Lego ALOT when they were young. We have it all stored away awaiting grandkids.