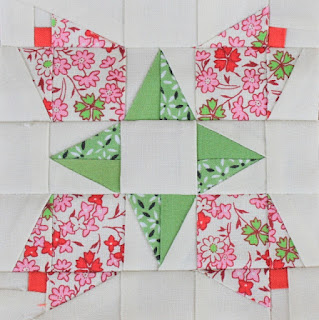 This is Midget Block #100, it is called Magnolia Bud and was paper pieced.  I think there were 10 sections, but they ended up going together in simple little rows.  I really like the little red bits, and the two greens add a nice touch I think. 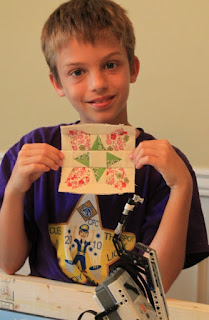 Ryan was kind enough to take a break from his Lego programming for long enough to hold the block up for me.  He thought it was "pretty cool", coming from him that is high praise indeed.  After finishing this one, I realized that I missed some of the blocks in the 90s, so I will have to go back and add those in.  I'll have to print out some more patterns first though, I seem to have worked my way through everything that was ready to go.
Speaking of using things up, I am out of Tiny Tuesdays this year and starting to work on Mini Mondays instead.  The posts will seem out of order, but it all makes sense to me.  Just 22 more blocks to go!
Posted by scraphappy at 7:00 AM

At the pace your going you will be done before Halloween. Keep going, you can do it!