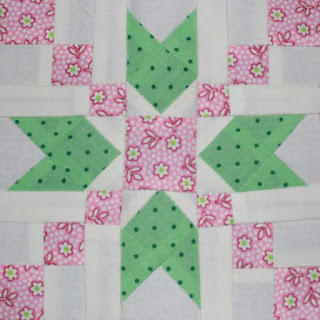 I wasn't going to sew tonight, but when I popped in to see who had posted, I saw that Bonnie was online for quiltcam.  It took just about one hour to get this little guy all cut out and sewn together.  It is traditionally pieced and came together almost as the directions were listed.  If you look at the small pink squares, you will notice that the ones closer to the center of the square are smaller.  They were initially cut at 1 1/8 inches, but were supposed to join with rectangles that were cut to a 1 inch width.  I trimmed the squares down and they fit just fine with the green arrow units. 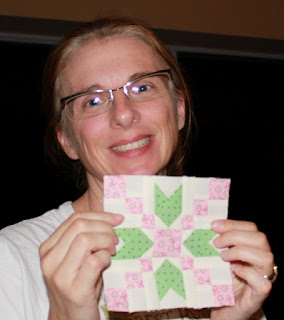 I think it is a really cute block.  I like the pink and green together.  This is definitely one that would make a nice quilt.  In fact, it reminds me of a Bonnie Hunter pattern -- maybe it was called Jared Takes a Wife?  The arrows were put together differently, but I think it was the same block.
Posted by scraphappy at 6:30 AM

Love this block and Monday's is a cute one too. Sounds like you had quite the marathon if you have the Christmas Day post already written! I need to stitch up my midget block today. No sewing at all this weekend while I worked.

I'm a bit upset with you right now, not really.
I have had 60 of these blocks printed out for a couple years now and have never done anything with them. So this morning I printed out 20 more and I'm almost ready to start making blocks.
I love how you have all your blocks linked to the Midgets tab. I might be checking those all out soon. LOL

I love the pink and green too.

Yep, that's Jared Takes a Wife. One of my favorite blocks! The original name for the block is Blackford's Beauty. I'm collecting solids to do this one in brights on a black background someday :*) I really like your pink & green though - I may have to do it in two colorways :*)

Another great block...I really like the colour combo as well.

Very cute block. I like the pink and green too.

It is, indeed, a cute block.

That block would make a great quilt. I would have to do it crib size though I think.