Here's a nice easy one.  Its just a four patch really, so the pieces are pretty big. 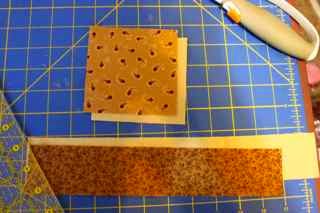 You could use the easy angle ruler for this one, but with just two HST units, I decided to use the old two squares method.  Also, I had a nice pile of charm squares in the brown bin to use up.
The unfinished unit needs to be 3.5 inches.  So I think the traditional math says to cut the squares to 3 and 7/8s -- I just did mine at 4 inches, cause it gave me a bit of squaring up room.  For just two squares, it is just as easy either way.
Anyway, cut two squares, one brown and one background colored.
You will also need 2 inch strips in brown and background that are at least 8 inches long.
The brown for the strips can be the same or different from the brown in the squares. 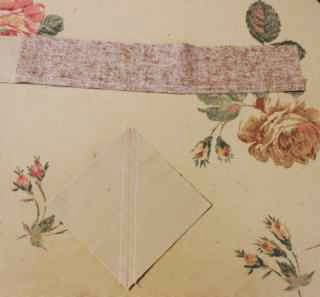 Sew the strips together.
Place the squares right sides together and draw a diagonal line down the middle from corner to corner.  Sew a quarter of an inch on either side of the drawn line. 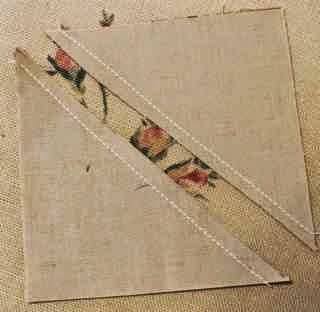 Cut along the drawn line on the sewn square to divide the two HST units.  Open and press toward the dark.  Remove the dog ears.

Press the strip set open with the seams going toward the brown.  Sub-cut the strips into 2 inch sections.  You will need 4 of them. 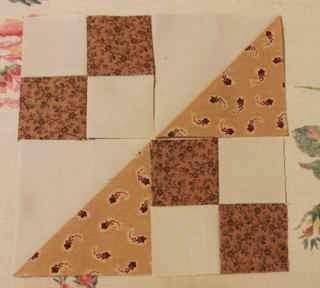 Sew the 2 inch subunits together to make four patches.  Arrange your blocks as shown.  Notice that the four patches don't go in the same direction.  This really bugs me personally, but it is the pattern. 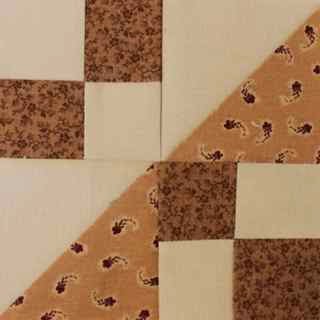 Sew the four subunits together as shown.  Pretty quick, right?
Posted by scraphappy at 8:01 PM

Well, I was caught up when I set my post to go tomorrow! Now I am one behind.... tomorrow night =)

Definitely an easy one. I need to go get the ones that Deb posted so I can get caught up today.