Home with a Sunrise 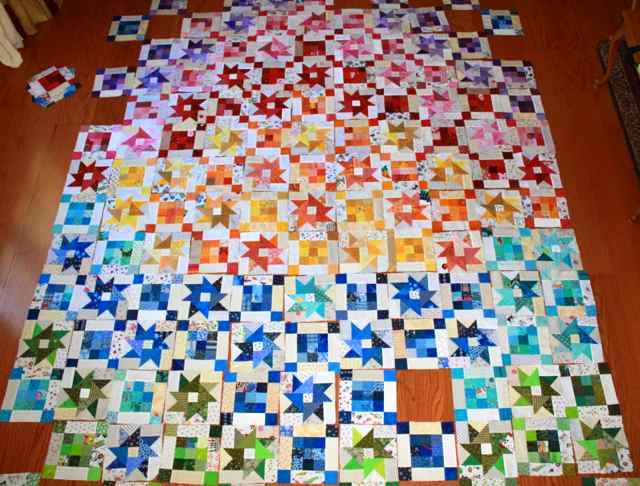 As much fun as it is to go away, even for work, coming home again always feels SO good!  We finished up with our work around lunch time today while I was getting a text from Kurt with pictures of the kids at Universal.  It was a day off school for teacher inservice and they took advantage.  Knowing they would be busy for a while, I ate a leisurely lunch before starting my drive home.  It was a nice uneventful trip and I arrived at about the same time as the rest of the gang.  Anna and Sydney were both busy with craft projects of their own, so I though I'd put out the star blocks I made this week with the framed nine patches from earlier.  I do need just a few more star blocks to round out the collection, but it is almost ready to be sewn together.
This block, called Mai Tai Surprise, is a Bonnie Hunter pattern.  It was posted on her Addicted to Scraps column in October of 2012.  I also think she used it as the quilt pattern for one of the quilting cruises she hosted at about the same time.  I did change out the color placement just a bit, and made monochromatic blocks instead of the scrappy ones she showed, but I really do love the effect.  The stars have partial seams, which do take a bit of concentration, but the effect is totally worth in my opinion.  Anyway, mine is called Mai Tai Sunrise and I really love how it is coming together.
So now I'd better do the normal home after a trip things, like unpacking and laundry.  After that though, I'll whip up just a few more stars and get this guy all ready to sew together.  Such a nice way to jump start the weekend!

Posted by scraphappy at 5:06 PM

Going to be absolutely beautiful. Love your colors.

It looks fantastic... such a colour sparkle!

Well, no wonder I love it so much--it is a Bonnie pattern! It is a beauty!

That's going to be beautiful!

Your quilt is going to be gorgeous! I love all the stars and 9-patches together.

A very happy rainbow star show. I love it.
Hugs

And it does look just like a sunrise. What a smashing quilt this will be.

It's going to be a beautiful quilt! Love the colors, you nailed the sunrise with those.

Oh wow... This is a stunning project! Love the way the colors are laid out. Dazzling eye candy.

Gorgeous already! I'll have to visit Bonnie's page and look over that pattern. Thanks for sharing.