My dear husband has gotten into this very bad habit of way over scheduling.  He is always talking about trying to be in three meetings at once at work, but now it is starting to expand into my life.  Now he is triple booking me to drive the kids around in circles all summer.  So today Anna had Lacrosse Camp from 9 to 11 in Palm Bay, which is at least half an hour south.  Ryan had Mr. Science Camp from 9 to 4 in Satellite Beach, which is just over the causeway to the east.  Sydney needed to be dropped off at her sleep away camp which is two hours away to the north and west of Orlando, arriving between 2 and 3:45.  All doable so far, if I was two people, but then I reminded him that the door installer was supposed to be here between 9 and 12 to try to fix our door again. 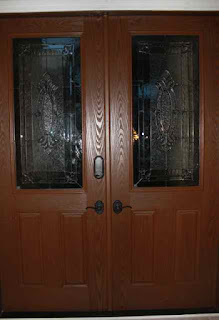 The door was installed, I think around Christmas time, but the molding on the side was defective and they were supposed to send a new piece.  Turns out that there isn't a new piece, because our door was the very last one ever of this particular style to be manufactured.  So Kurt took Anna while I rushed over to drop Ryan and get back before the door guy.  Then Anna got a ride back while I hung out with the door guy swearing incredulously, because the new door that they sent was the wrong kind and wouldn't fit.  He had to take down all the doors and switch them in and out and try swapping various parts before putting up the old door again and trying to camouflage the defect with some brown caulk.
I was only a little late getting Sydney out the door, but we made it just in time before registration closed at 3:45.  I wasn't quite all the way there yet when Kurt called to ask me if I could get Ryan at 4 because he thought the pickup was at 3 and needed to go back to work again.  Big sigh. 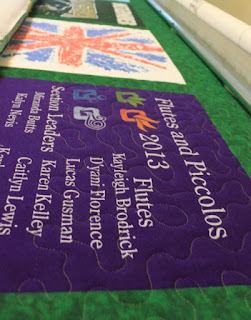 After finally getting home from all of that, I really needed a little calm and quiet time.  So while Kurt and Ryan watched a recorded battle bots, I snuck off to do the first row of quilting on the Miranda's T-Shirt Quilt.  I chose a sage green thread for the top and a lemon yellow for the bottom.  Just a nice loose meander on this one. 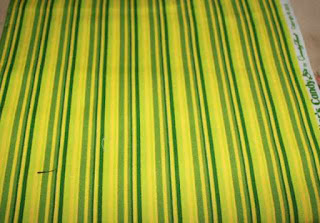 I think that I will use this yellow and green strip for the binding.  Striped bindings are so much fun.
Battle bots are over and I'll go back to the binding on Mai Tai, I've just rounded the last corner, and I am loving the hot pink binding so much!

Posted by scraphappy at 9:02 PM

The hot pink binding looks GREAT on Mai Tai and the green and yellow stripe will be the PERFECT binding for the T-quilt. Nice choices on both!!

Whew, I'd be dizzy trying to keep up with you. Glad you got a chance to relax for awhile with some quilting. I love stripey bindings!!

Now THAT is a true "mommy" post - specially as our kiddos are in the 10-18 years of age category!
Are you metering all that driving? ?? ;) I'll calmly retract my own frustration of back-n-forth driving to/from school every 2 hours this week to either drop off or pick up one child or another; you have me beat! ;)

Mai Tai is amazing!!!! How awesome of you to push to a finish in order to be part of Bonnie's quilting crew ;)

Yikes - that is a lot of driving. Glad you got some quality relaxing time in. Have you put the taxi sign on the top of the car yet? Greg know's not to schedule anything - I do it all so I can coordinate everything since I have to do all the driving =) The downfall of owning your own business.

I well remember that stage of my life; it was a relief to get them driving. But I did miss the talks that happen while car riding together...

I am totally feeling your pain!!! I always tease and say " go practice your NO in the mirror" Lol - Glad you could get some quilting in and relax a bit

Wow, what a schedule! DT is driving now, so we no longer have the battle who is leaving work when to get her to the next thing this summer.