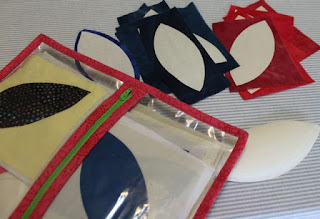 Since I'm going to be gone for two weeks of August, and frantically trying to catch up for the two weeks after that, I worked ahead on my sampler blocks today.  I've been on a bit of an organizational kick this weekend, and so as soon as I was done, I ironed some freezer paper templates onto the leftover hand dyes so that I could put the rest away.  So far "away" is on top of the GO! cutter, thinking that I will make some drunkards path blocks out of them all.
Now I've got a stack of applique blocks ready to prep when it gets calm as well as gobs of pictures to start putting tutorial directions together for next month.  Sydney got home from camp yesterday and immediately left for sleepover.  That meant she slept most of the afternoon and I got quite a bit of work done.  Kurt has taken the other two to the national weight lifting match in Port St. Lucie.  He just texted to let me know they would not be home for dinner.  Poor guy.  He said it was cold and loud and long.  Hopefully I'll be able to applique a few more orange peel blocks after Sydney and I enjoy the macaroni and cheese that she chose for dinner.  First though, I'll head over to Kathy's Quilts to see what other slow stitching people are up to on Sunday.
Posted by scraphappy at 5:49 PM

Hope you get to enjoy some slow stitching this evening. DT is off at Journalism camp till Tuesday. So I get to sew for a while this afternoon.

Enjoy your hand stitching! The summer is passing by way too fast!

So nice you got some one on one time with your daughter. Mac n cheese - yum. I picked up a roaster chicken from Sams.... easy dinner. Hope I have leftover chicken for enchilada's tomorrow night...
you are really making me want to do some more orange peels....