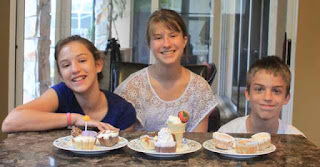 Yesterday was the big cupcake wars battle.  For those people wondering, cupcake wars is a TV show based on baking cupcakes, not a battle where you throw cupcakes at one another.  That might have made an even bigger mess, but I can't be sure.  Anna, Ryan and Sydney each had two hours to bake four each of three kinds of cupcakes.  They were required to use at least three of five mystery ingredients.  The mystery ingredients were caramel, pecans, chocolate, strawberries and graham crackers. 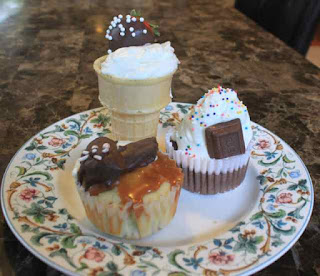 Anna won the award for presentation.  She made a bunny/turtle out of the pecans, caramel and chocolate.  Most impressive.  The girls had to make their cake batter from scratch, but Ryan was allowed to use a mix.  Given that he has never baked anything before, it seemed like a reasonable handicap.  Cleaning up again took most of the afternoon, but everyone was happy and busy.  Can't ask for more than that, right? 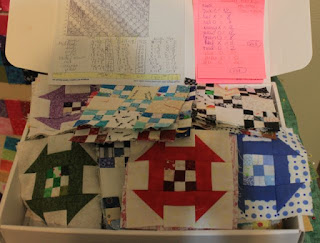 So I spent the morning with my Costa Rica Team planning our camera trap deployment for Costa Rica.  The afternoon was open though, except waiting for the bug guy to come and try to get rid of the giant bugs that seem to have invaded lately.   So while I waited, I did some major organization of the OMG Churn Dash blocks.  There were so many bits and pieces made, but I didn't know if it was enough of the right colors for my plan. 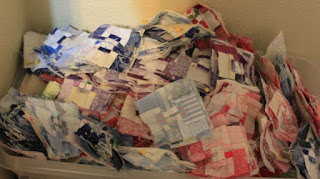 So I pinned the nine subunits needed for each block together.  5 nine patches and 4 backgrounds for the X blocks.  4 HST units, 4 striped bits and 1 nine patch for each churn dash block.  Here they are all ready to go.  After sorting and counting those, I realized that I only need 137 more blocks for my finished quilt.  I'm not sure when I'll get back to it, but at least I'll have a note to remind me when that happens.
Posted by scraphappy at 6:00 PM

That sounds like so much fun! I might have to steal that for my kids to do later this month. I saw a scorpion in the house two days before the bug guys came to wipe down and spray the outside. I hate those little buggers.

And they got to eat their entries! Fun! Notes to self-essential!

That is a most delicious looking cupcake war! Congratulations to everyone. The OMG Churn Dash blocks are great and headed towards a very impressive quilt!!

I guess the prizes were cupcakes? What a fun summer event.
Have a great 4th of July.
Hugs

What a great idea for your kids! The OMG Churn Dash blocks are looking good. Too bad you still need so many more. Big numbers like that depress me (unless the blocks are already done!) so I don't often plan out big projects.

That sounds like so much fun!!! These are the memories they will carry with them all their lives :*)

HA! The last post I had read was about the Cupcake war in the plans for the next day (I'm a wee bit behind)....
So seeing the aftermath post -- LOVE IT! HA! We don't watch Cupcake Wars, but we love Chopped; perhaps a Skattebo episode of Chopped is in the future of this household.

WOW! That's a LOT of progress on OMG! I should check out my progress, too, but I've moved away from it as my L/E; replaced with red and blue 9-patches.