Blackford's Beauty is a classic quilt block which is apparently named after a river crossing in Maryland that was used by the confederate army during the battle of Antietam.  I found some background info on the Upstate Heritage Quilt Trail Website as well as Quilter's Cache, in case you are a quilt history buff.   I love to make four patches and nine patches as thread catchers or leaders and enders between quilts blocks and always keep my eyes open for blocks that will use these random units.

In searching through all of my quilt block book collections, this one stood out.  I love anything with a star and there are lots of four patches in there that are happily scrappy and perfect as leaders and enders.  As I started to do research, I found the Bonnie Hunter Version called Jared takes a wife.   She has a great tutorial which uses flip and sew corners on strips for the chevron star points.  It gives the star points with one center seam and yields 16 bonus HST units per block. I do enjoy the look of this block, but fumbled through the directional star points and had to remake several while trying out the pattern.   I'm also trying hard to reduce my scraps which made me look for something without "bonus" triangles.
I made this first trial version using Bonnie Hunter's method and then decided to change the center star points to a black solid.   I am also using solids for the star points to unify the blocks and contrast with the random scrappy corner units. 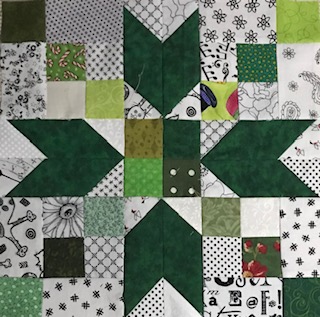 Having seen several diagrams with alternative sewing options, I also wanted to try this block with flying geese unit.  This plan assembles each star point from two different color arrangements of flying geese and has 7 pieces, but no flip and sew corners.   While I don't enjoy the seam lines quite as much, I found it easier to work these in as leaders and enders because the geese are symmetrical and easier to keep track of between other blocks. 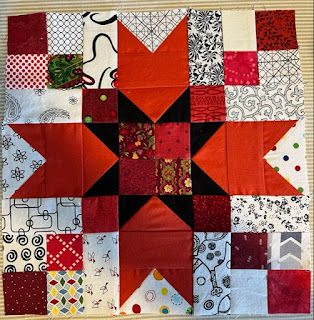 One set of flying geese has a light body and dark wings while the other has a dark body and black wings.   You need four of each, which is super handy if you plan to use the Four at a Time Flying Geese method.   I have used this technique before and really enjoy it.  The flying geese for this block will finish at 1.5 by 3 inches which means that you will need 4 wing squares at 2 3/8 and one body square at 4 1/4.
For more traditional piecing, just cut your 4 1/4 inch square on the diagonal both ways to yield 4 bodies and cut your four 2 3/8 inch squares in half once on the diagonal to yield 8 wings.   Here is a page with four methods explained
You could also easily cut these units with your Accuquilt die cutter if you have one, the HST and QST units are both part of the 12 inch block cube as well as the 6 inch block cube.
OR, just use flip and sew triangles on 2 by 3.5 inch rectangles.   The fun thing about flying geese is that are are so many ways to make them.  Choose the method that works for you.
I prefer to pull from my pre-cut strip bin though and usually rely on specialty rulers instead of trying to find scraps big enough into cut randomly sized squares.  It all depends on how you store your scraps. 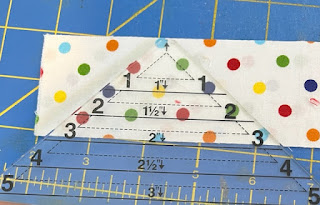 The body of the goose comes from the companion angle ruler and a 2 inch strip. 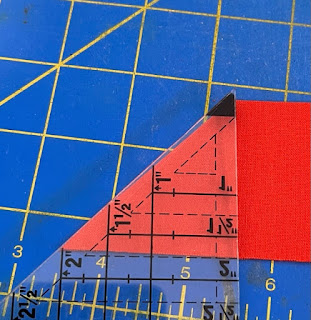 The wing of the goose comes from a 2 inch strip cut with the easy angle ruler. 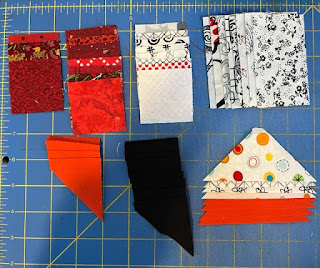 For the corners:
For the center:
For the star points: 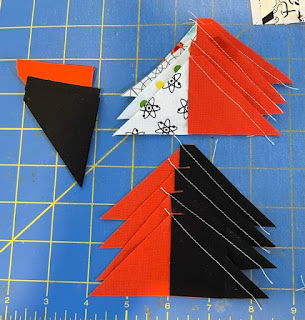 Start by making the geese using the method of your choice.  I am showing the specialty ruler method.  It would look the same if you had cut your units from squares or with a die cutter.  The four at time method or flip and sew method would look slightly different during, but yield the same flying geese in the end. 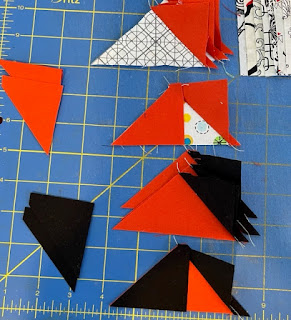 Sew one wing on your geese and press before adding the second wing.  Notice the color arrangement.   Four geese are dark on white, while the other four are black on dark. 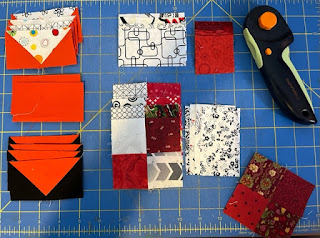 While you are sewing your geese together, work your four patches through, first as pairs and then into fours.   There are four four patches made of light and dark and one made of all dark for the center. 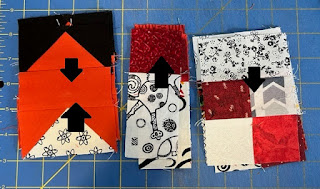 The next step is to sew build your four patches up by adding a light rectangle to one side.  The other half of the light rectangles get a dark square sewn onto one end.   Press the seam on these two units in opposite directions.  I pressed toward the dark square and the light rectangle toward the four patch.  This seems counterintuitive, but it helped the seams nestle when they were joined to the star points in the last step.
For the star point unit, I pressed away from the geese and toward the center rectangle on both sides.
While these are working through the machine, sew your star points together.  Each one has three parts 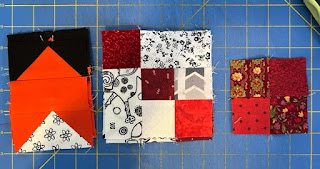 add the last side your your four patch and you are ready to assemble your nine patch block. 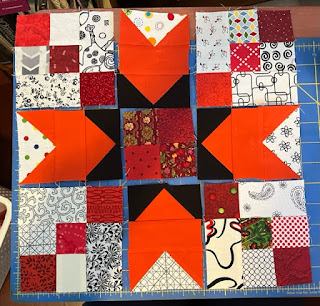 The black star points form a star around the center square and the dark squares in the corners form a diagonal toward that same center.   Just sew this block as you would any nine patch block.  Press away from the star points as this is where the more complicated diagonal seams are likely to be problematic. 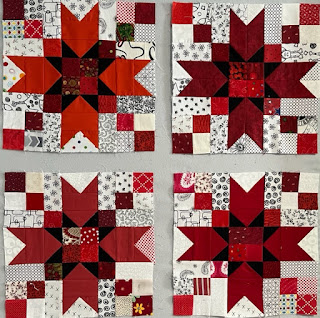 Here are my four red Blackford's Beauty blocks for January.  I plan to make 4 of these 12 inch blocks each month and then set them together with white lattice strips and black cornerstones.   You can see the Bonnie hunter chevron method as well as the flying geese method both side by side here and decide which method will work best for you.  I'm still torn between the symmetry of the goose method and the linear seam of the chevron method.
Posted by scraphappy at 9:42 AM

It’s a beautiful block! Is your black fabric all constant? Just thinking about my own stash! Thanks for the detailed instructions!

I really like how you used black for the star points! Contrast is great with the red color. Thanks for all the information on how to put this block together and for hosting another year of RSC!

Thanks for the tutorial! I made my blocks using Bonnie Hunter's method - although I didn't know it at the time - I just looked at your green block and figured out a technique for making it. I really like the look of the black star points, so I guess I'll have to give that technique a try before I make any decisions on using this block for an RSC project this year. Fun!

These are really beautiful star blocks and those little black star points will pull them all together. Great plan!

Great tutorial! Although I’m not ready for that many pieces in my block.

Thanks for writing up a tutorial, Angela! I know you probably so it to keep the process in a safe place. It's nice for those of us who might want to jump in with you on making those gorgeous blocks, too!

Great blocks--I really like the red one-the star shows up the best! thanks for the tutorial!

I do like this block design! I think that the Flying Geese would be an eaiser method. Thanks for the tips.

Thanks for the great tutorial. I made 4 blocks from scraps. Can't wait for the next month's color.

Thanks for sharing the Blackford Beauty. Those are really lovely blocks. Love your reds. Will you use B/W for backgrounds throughout the quilt?