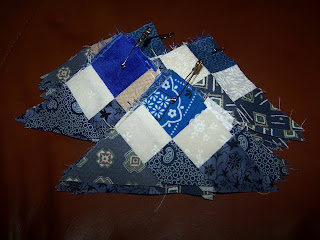 I finished step 4 of the Carolina Crossroads mystery quilt today! We got back into town late last night and I was able to steal minutes between unpacking and laundry and more unpacking and more laundry. Bernie (my sewing machine) was in the shop while we were gone. She had been acting up for a little while, but I didn't want to give her up with so much Christmas crafting in the wings. There was a software update and she should be as good as new. I had to break out Ken (my old sewing machine) to fill in while she was gone, and it just wasn't the same. I sewed on him for a lot of years, and and tried my best to make it work, but in the end, he just couldn't handle free motion quilting. I spent hours sewing and resewing a quilt for my new nephew last Easter, and even after all that, still ended up sending it away with eyelashes on the back. I showed it to my husband, who thought for a minute and said, "I see what you mean, that really isn't acceptable." A gift certificate for a new machine showed up for my anniversary. Even though it seemed like a lot of money, my husband finally put it into perspective by saying, that a new machine cost less than our TV, and I probably spent more time on the machine than in front of the TV.
Back to Carolina Crossroads, I have to assume now that the blocks are going to be set on point. That should make these little guys the setting triangles I suppose. We still haven't broken out the Companion angle ruler, I'm still guessing that is going to be used for the center of the block. I'm having fun making these little guys, even more so because I don't know how they are going to turn out.
I think I'll work a little more on my bow ties quilt this evening. I had planned to pack some handwork for our trip, but we ended up rushing out at the last minute frantically and it was left behind. I've missed having something quilt related to work on. Something about making the shapes and colors come together is soothing.
Posted by scraphappy at 7:49 PM

Great job getting step four done so quickly - my Bernie is due for service too, but I am always reluctant to have her leave me ...
*hugs*
Tazzie
:-)

I'm always better off doing something sooner than later, once I start to procrastinate, it just gets easier and easier.

Congrats on finishing Step 4. I wonder if you are right about the quilt being on point ... I did wonder when Bonnie had us cut the triangles with the long edge on the straight grain :)