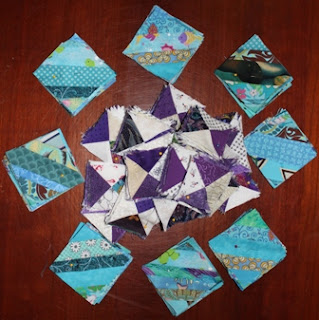 Step two of Orca Bay went about twice as quickly as step one.  I got help pulling paper from the back after dinner while the kids were watching Tangled on Netflix.  I like to pull the paper off first and then iron again to get them nice and flat for trimming.  I was wishing I had the 3.5 inch square for my Go Cutter, squaring up string and crumb blocks is so much faster that way.  Judy D. had the niftiest trick for starting the blocks with a little dab of glue to stick the first strip onto the paper. Glue sticks are almost as handy as freezer paper for quilting. Be sure to check out every bodies progress over at Quiltville. 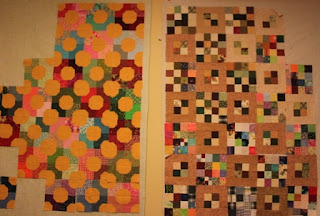 Speaking of glue sticks, I'm out of prepped blocks for the Cheddar Bow-ties inspired by Bonnie Hunter. I'll try to get some more cut out during the week if there is any down time.  Until then I'm working more of the brown borders through for the Four Squared quilt.  I'm not sure which of these will end up finished first, but they are both coming along slowly and surely.  After finishing the binding on three quilts during the Thanksgiving car trip I'm feeling better about the UFO/WIP list.  I have some Christmas ideas percolating though so it would be nice to cross a few more off the list before I succumb to temptation again. See what other people have on their design walls at Patchworktimes.
Posted by scraphappy at 9:04 PM

It always amazes me how much you get done!!

Its good that PArt2 wasn't as intensive as part1. Well done.

WOW! I have a third of the first clue and one block from the second done, LOL too much grading and final test writing going on here! I will get there though. Your blocks look fabulous.

Wow I love all in this post and particularly your differents colours for Orca Bay. I post mine later in the day :)

I'm liking your color choices for the Orca Bay!

Your blocks look great together. I like string blocks but I find that they take me a long time to make. I think you are right though, it did go quicker than the first step.

I love the cheddar! I have some cheddar fabric, maybe i shojld pull it out........

You always have the best things happening! Love the OB colors. I too need to cut more for my bow tie-thanks for the reminder. :)

Loving your quilts so much! Thanks for the link to the glue stick tip. I was looking for help with my paperpiecing large strips.:)

You are making wonderful progress on both the Orca and the Cheddar BowTies, I'm waaaaay behind you, I hope that mine turn out as well as yours have.

Great blocks. I tried your tip and it made the process much easier. Thanks for sharing.

cheddar bow-ties is looking really good and congrats on the bindings!

Mmmmm those are great colors!!!

Netflix is so great for keeping little kids occupied. But I'm still trying to figure out Tangled (saw it for the first time with my own kiddos this morning) Glowing magical singing hair?

So much going on!

Doesn't the glue stick make a mess inside your machine or build up on your needle?

Looks wonderful, you have managed to squeeze in more than 24 hours a day to accomplish what you have done!

I really like the colors you are using, congrats on finishing both steps! I couldn't take it any longer and just started, I have a ways to go on step 1 but step 2 is done.

Wow, you're productive! I'm not nearly as far along.