Basking in the "Bs" 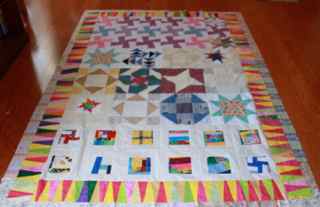 Borders and backs are the bane of my quilting experience.  I have more flimsies in the closet hanging out waiting for the "Bs" than I care to admit.  It used to be batting and basting as well, but fortunately, the handiquilter got me over that headache.  So today I decided to just persevere and get some quilts past the awkward phase.  The orphan blocks got a leftover dresden wedge border.  Anna has called dibs on this quilt.  She wants to take it to sleepaway camp later this summer.  It sure is unique. 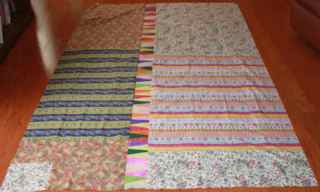 Here is the back, random chunks of floral fabrics that didn't go with anything else and another strip of the dresden bits.  Definitely one of a kind. 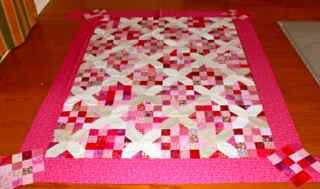 Next up I got the pink fabric cut that Anna had picked out for the border on the second chemo quilt.  I think I'll cut the extra 16 patches at a wonky angle and use them as cornerstones.  These just need to get trimmed to size and sewn on.  There is enough of a pretty pink print to make the back with no trouble. 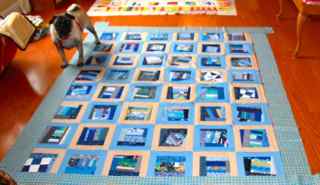 Sand and Sea will have a simple border from a coordinating print that was bought special.  There is still a bit for the back to go along with extras of the tan and blue.  Maybe in horizontal stripes to represent a beach horizon? 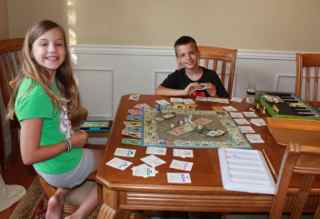 The kids wanted to go see the movie Epic this morning.  There won't be a lot of days this summer when all three of them are home at the same time so we took advantage of the opportunity for a group outing.  It was actually really good.  Ryan and Sydney have been playing together beautifully all afternoon.  They worked together to clean Ryan's room after lunch and then started a game of dino-opoly.  I think Ryan is winning after getting museums on Gigantosoraus and Seismosarous.  Kurt is just back after going out with some work people, I made a nice pot of chili in the crockpot which the kids said was actually very good.  They even said I should make it again sometime.  Some days are just really good all around.  I hope that tomorrow doesn't swing the other way to compensate.

Posted by scraphappy at 7:57 PM

I like all three! Especially the first one :D
My weakness is backs and quilting.

Oh those dratted B's!!! I still have issues with the basting too, and way too many quilt tops on the closet shelf waiting for attention. I think Anna is a very smart girl to claim that quilt - it will be a unique quilt that will inspire interest from a lot of different people in her life for many years :*) Glad you had such a great day - here's hoping tomorrow is just as nice!

Sounds like a perfect summer's day, but you're right, they're rare when there's more than one child involved. Fingers crossed that you get more of them.

I'm glad you talked about this, I have similar issues. I am interested to know what is a handiquilter, can you show that next?

Love the scrappy border on the orphan block quilt. It's definitly fun! Sounds like you beat the B's this weekend.

Nice quilts - nicer kids! How did you luck out?
Hugs