This was supposed to be done last month. It was all kitted and ready to go, but there are only so many hours in the day and so it waited patiently until today. It would be nice in green too, wouldn't it?
I've had a wonderful day of sewing.  Three day weekends feel so much longer than two day weekends, don't they?  I am hoping to continue my sewing marathon in the morning.  There are several blocks scheduled to post for the rest of the month.  Pinterest is up to date for those who like to look ahead.  The RSC Sampler page is updated as well.  Yeah for relaxing days at home!  I did realize as I was posting everything that I accidentally made the same block AGAIN.  So now there are two Anvil blocks and two broken dishes blocks.  You would think I would remember making the same block twice, wouldn't you?  Well, best not to think too much about such things.  Maybe I'll rearrange one of them later.  Maybe not. 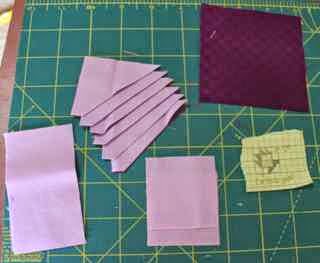 I used two dark purples and one light purple.  I would have used the same purple, but when working with scraps, I've learned to use what I have.
Dark purple = 1 square 3.5 inches
Light purple = 2 rectangles 2 x 3.5 inches each
Light purple - 2 squares 2 inches each
Using two inch scraps of light and dark purple placed right sides together, use the easy angle ruler to cut 6 HST units. 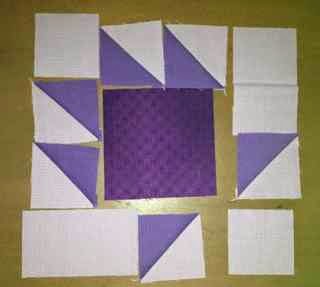 Sew one pair of HST units to the left side of the large square.
Sew one light square to the right side of the other pair.
Pay careful attention to the direction of the HST units, it is easy to get them turned around. 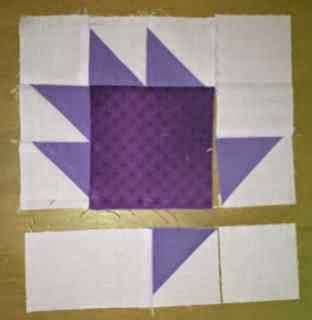 Sew the other set of HST units to the top of the large square subunit.
Also sew HST units to one end of each light purple rectangles.  Again, notice the orientation of the dark purple.  Press toward the large purple square. 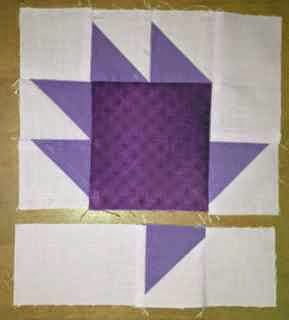 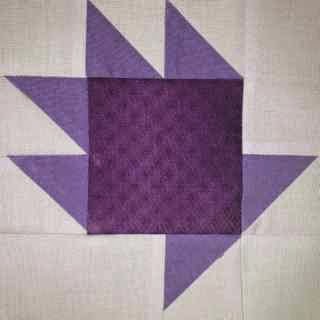 It would have saved a few seams to use a single large triangle under the foot of the cactus pot, but I was pulling from the scrap basket and didn't have any larger pieces.  It looks like it would be a HST unit cut from a 3.5 inch square or even a 4 inch square cut in half and then trimmed to size.  Use what you have on hand, that is the essence of scrap quilting.
Posted by scraphappy at 3:09 PM

I don't mind if you do some of the blocks twice in different colors. I'm having a good time playing along.

Another fun block. Cacti are usually green aren't they?