I  have officially finished all 100 blocks for the Rainbow Scrap Challenge Sampler.  Officially!  The remaining blocks are scheduled to appear over the next few days.  Check out the RSC Sampler tab at the top for links to the tutorials or go to Pinterest to see all the blocks. 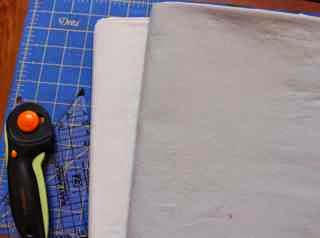 So now it is time to move on to setting decisions.  I ordered these two shades of grey from Connecting Threads.  The lighter grey was called parchment and the darker grey is silver linings. 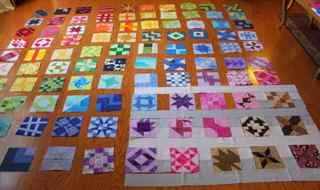 The sashing strips are 3 inches wide.  My husband saw them and said, "Wow, those are really wide!"  Wide is what I was going for.  I'm trying for a more "modern" feel and wanted to give the sampler blocks some space to breath.  With the current arrangement, I should end up with a queen sized quilt.
So the vertical stripes are half light and half dark.  The horizontal stripes alternate between dark and light.  It is supposed to make the blocks look like they are floating in between the stripes. Trick or Treating tonight, but other than that, it looks pretty calm.  Last football game of the season, last Lacrosse game of the season, wonder what will be left next weekend?
Posted by scraphappy at 1:16 PM

Love the sashing Angela!!! Gray sets off color so nicely, and using the two-color theme is perfect :)

I love your idea for the sashing!

Yay on being done with the blocks and tutes! Thanks so much for all that hard work, I really have enjoyed it all year long! Are you going to give us directions for how you sashed things up or should I do something easier on my own, lol! Cannot wait to see how yours comes out! I managed to do two blocks before work today...have a few more to go!

I will be curious to see how it all comes together.

Going to be one stunning quilt.

Love the idea of the 2 tone sashing/borders