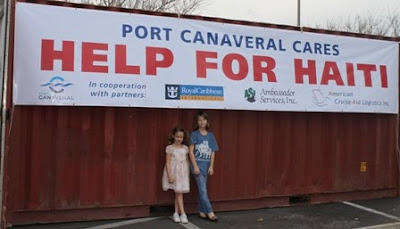 The kids and I drove up to Port Canaveral this week to drop off the rice and beans our Girl Scout troop has been collecting for Haiti. They are going to be delivered by the cruise ships when they stop there during their regular schedule. There was much discussion about whether it was appropriate for the cruises to continue stopping there, but they decided that it was better to let people keep their jobs and have money continue to flow in to the country. Ironically Haiti is one of the stops on the cruise we are taking next month during mid-winter break. 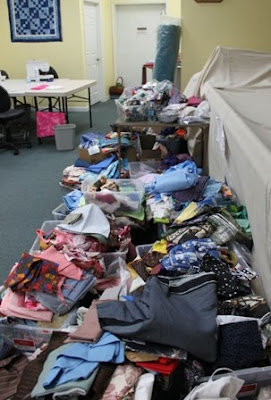 I've just gotten back from spending most of the last three days at a quilt marathon for Haiti. A local quilt shop organized it and has been open 24 hours a day for the last week trying to make 300 quilts for the Salvation Army to deliver to Haiti. I was booked with meetings for most of the week, but made it there starting on Thursday to sew to my hearts content. There was a nice article in the newspaper about it and lots of people donated fabric, batting, and thread as well as snacks. People came and went with their schedules, but there were so many during peak hours that they took over an empty space next door that used to be a craft shop.

There was an assembly line going with some people cutting while other pieced or cut borders early in the week. By today most of the activity was shifted to layering, quilting and binding. I got to do a little of everything at some point and managed to log about 24 hours overall. 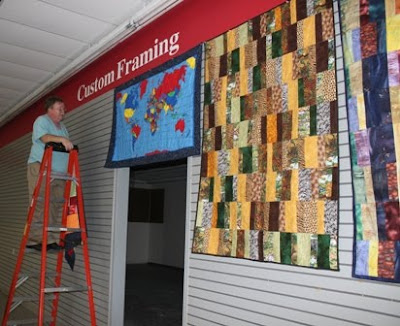 The total count when I left today was about 200, so I don't think they will meet the 300 goal, but that is still a lot of quilts to come up with in a week. Some people took kits home to finish, so that might add more to the total in the end.

There were three main patterns, but while I was there, most of the quilts were 5 inch squares set on the diagonal. They used a cool method that I had never tried where the squares are sewn into a rectangle twice as tall as it is wide before the corner is cut off somehow and sewn onto the bottom to create the diagonal setting. I will have to try it with paper and figure out exactly how it works because it is nifty way to make a quick quilt.
I was on binding duty for most of last night and got really good at machine stitching both separate bindings and the flip from the back kind. Today I switched to quilting and was surprised to find that I could free motion quilt an entire top in only 20 minutes while I took at least twice as long to stitch in the ditch. I would have loved to stay longer, but I had been away from home too long and needed to spend some time with everyone here. We are all snuggled up on the couch now and they are all glad to have me back.
Posted by scraphappy at 6:48 PM

Hi! That shop looks suspiciously like The Quilter's Boutique. LOL! I was there too working on quilts for Haiti, too. It was a lot of fun to sew and socialize with everyone. Not sure if we met there, but wanted to say "hi". :o)

Last I heard they had 250 done and many people took tops home to finish, so they were saying they were going to exceed their goal. Yay!