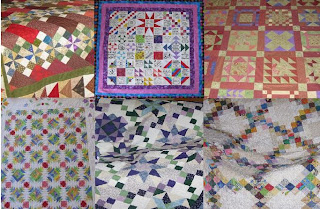 2009 started out well on the quilting front with a plan to complete a UFO every month. That went well until school started again in August and a new busier schedule sabotaged those plans. Still, progress was good and several longtime loungers were crossed off the list. 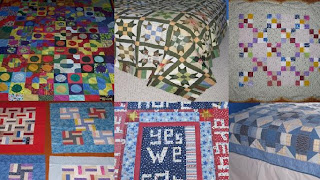 A few new projects snuck their way in as well, with a ginourmous Sister's Choice being the most substantial finish for the year. I'm not quite up to Amy standards as far as numbers of finishes, but it seems like enough to me.

In roughly chronological order, for my own enjoyment more than anyone else, here is the list for 2009:
1. Old Hurricane Road -- January UFO based on Bonnie Hunters Old Tobacco Road Mystery Quilt along graces the daybed in the guest bedroom.
2. Yes We Can -- Inauguration quilt, takes turns hanging in the foyer
3. Happy Chains -- February UFO done as leaders and enders using 2 inch blocks, given away to a shelter for women and children through the Girl Scouts.
4. Buttons and Bowties - March UFO also given away to charity through the Girl Scouts
5. Pineapple Brights, AKA The Welcome Quilt -- Not really a UFO, but finished as my April project over spring break, takes turns hanging seasonally in the foyer.
6. Things Quilters Say -- May UFO built around a preprinted panel of quilters sayings, hangs above my sewing table in the guest bedroom.
7. 9 Patch Doll Quilt - made to practice scalloped borders for the welcome quilt, being used for dolls.
8. Doll sleeping bags -- 5 sleeping bags given as party favors for Anna's sleepover party.
9. Teatime Sampler - a self designed project based on a fat quarter bundle from Christmas 2 years ago, given to my niece Paige who let the dog lie on it.
10. BOM Samler -- a star based BOM from several years ago that was beyond my ability level at the time. Linking blocks were added along with borders to turn it into Twilight, my favorite snuggle quilt in a last minute frenzy of quilting before school started again.
11. Organizer boxes for my classroom at school together with a curtain, bulletin board covers and binder covers.
12. An i phone cover that got lost the next day.
13. Two dust ruffles, one for Anna and one for my niece Paige.
14. A Kimono for Anna's Holiday's Around the World celebration at school.
15. Sister's Choice - 110 by 110 bedspread for the guest bedroom in Mom's new house. Given as a Christmas gift.

A wonderful list of accomplishments---I had forgotten about the Pineapple quilt---I LOVE that one! Was that a Bonnie pattern?

Also--if I would have been drinking milk while reading this post, it would have come out of my nose at #12..."that got lost the next day." TOO FUNNY!