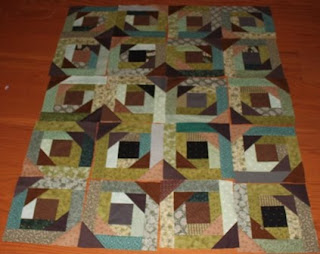 After a little research into the registry for the baby shower I discovered that the nursery is to be sage and brown, not teal and brown as I had thought. Having already shopped for the fabric, I decided to pull from my stash for sage green to use with the brown. The last pineapple blossom I did had a consistent background, and I'm starting to see the value in that. I tried another version with green and brown on a cream background, but this green on a brown background won the votes around here. I am not fond of the contrast personally, but I'll sleep on it I think before I go back to the drawing board. There is too much variation in both greens and browns to be able to see the pattern clearly. I get so stressed about making gifts for people. Maybe I should have stuck with the nine patches instea? Still, despite the end result, it was lovely to spend a whole day sewing. Most of the morning was spent finishing up Sock Monkeys. It just needs binding to be done completely and then I'll get a picture for posterity.
Posted by scraphappy at 9:22 PM