DH in the Backyard with an Axe 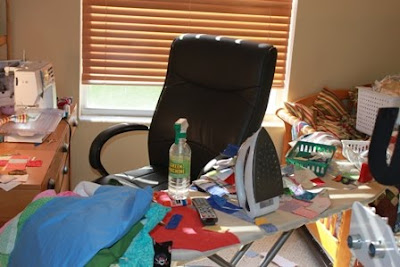 I was puttering around in the study, ironing and organizing some leaders and enders and odds and ends. Kurt was in the backyard working on a new clubhouse for the kids. I could tell by the determined footsteps straight to the downstairs bathroom that something was up. Sure enough, when I called out, "Do you need any help?" The answer was an affirmative.
Apparently it was due to the hot humid weather that the axe became slippery and bounced off of the 4 x 4 and into his shin. He tried to ignore it, thinking it was just a scratch, but when the blood started seeping into his sock, I guess he decided to have a look. Thankfully the urgent care clinic is close and convenient, letting us avoid the dreaded emergency room trip. 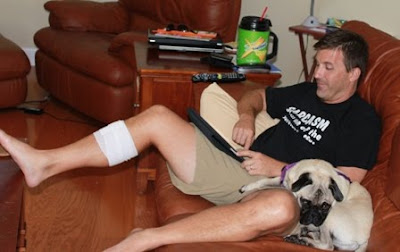 It took less than an hour to get 4 stitches and an updated tetanus shot. We made it home again in plenty of time for the Iowa game on TV. 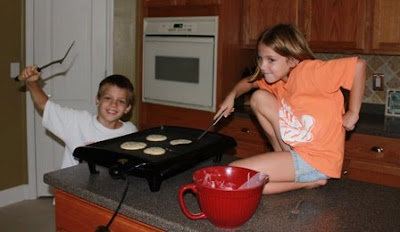 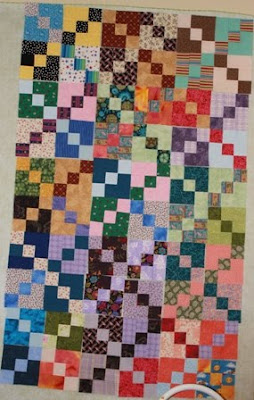 So after all of that, I did eventually make it back into the study again and worked on finding all of the parts of this project that got lost somewhere along the way. It is a scrap block by Bonnie Hunter from Quiltmaker Magazine. It's been a while, but maybe it was called Carolina Crossroads? It is a little long and skinny at the moment so I might cut out a few more blocks for the edges and quilt it up for a snuggler for the kids. Or maybe I'll try something creative with an asymmetrical border to get the proportions right without making more blocks.
Posted by scraphappy at 8:43 PM

I've seen that sheepish-male-grin before too! And I couldn't resist showing this to Paul....and I quote..."psht---sympathy bandage; That's a duct-tape wound. She needs the right man for the tool or the right tool for the man. Maybe he needs to stick to pruning shears."
(he can't help dishin' it out) ;0)
Glad he's okay though!

LOVE the shot of Sydney up on the counter! I think we have the same counter top, too!

I keep well out of the way when Christopher starts using any of the power tools. I'm prepared to help if he does hurt himself, but not to look on whilst he does it! Thankfully he hasn't had an accident so far (crossed fingers and toes) although he has cut through several power cords. Glad it was only a 'man wound' that Kurt suffered though. It looks as if the children are cooking what we'd call drop scones. Pancakes for us are bigger and flatter.

Bonnie called this one "Carolina Chain" in the QUiltmaker magazine...I'm making a little version of it out a my dotty scraps. It's a fun block to sew, eh??
I thought it might be cool set on pointe too!

So glad your DH is ok. Even we grownups can't be too careful, I guess. Do you have an Iowa connection, or you just like to watch the games?

Glad he only needed 4 stitches and is ok... your dog looks like the official sympathy giver in the house! I remember cooking on the counter when I was little - and we sometimes had pancakes for dinner too! Cheers! Evelyn