Little Bits of Lots of Things 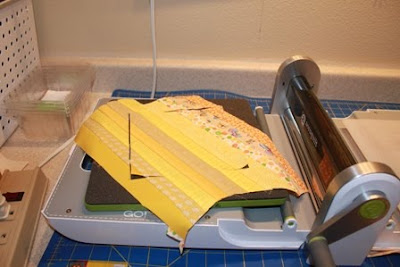 If I had chosen a focus project for the weekend, I'm sure I could have made good progress, maybe even finished something off. As it was, I chipped away at lots of projects and puttered around the house. It was a nice and relaxing way to spend a rainy holiday. This morning I got out the GO cutter and turned the extras from yesterday's moon fabric into string blocks. I'll take the extras from that, sew them together again and make some crumb blocks next. Using the 6.5 inch die is a nifty way of making strings without all that messy paper and flipping and sewing. These are all yellow and will eventually turn into a monochromatic string quilt (Amy suggested String Cheese for a name -- isn't that cute?). 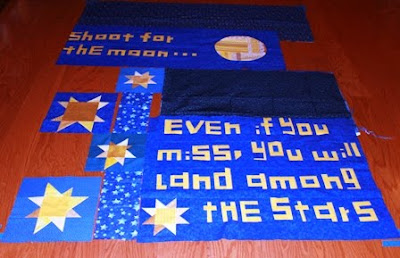 Working here and there I got the words for the moon quilt put together into two big blocks with a moon and a star. I'll let this one continue to simmer and figure out what comes next in the light of day. Anna doesn't want a lot of different fabrics, but if I had know the background was going to be consistent, I would have used different yellows in the letters. It's all going to be very uniform and even if she sticks to her guns. It is her quilt though, so if she wants to to be boring, so be it. I'm trying to subtly sneak some variety in there without her noticing. 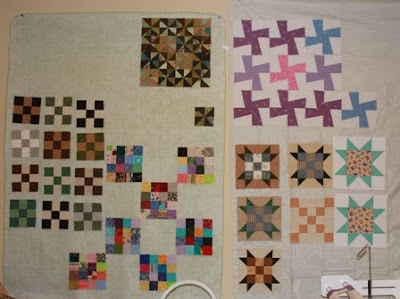 Next up, with the design wall empty, I took a lint roller to it and then rotated one to put up another. Now I've got lots more room to play so I threw up my current L&E project (another 4 squared) along with the nine patches for Mom's shams and the leftovers from my last few projects. While pondering all of that, I sewed the brown and green pinwheels together. They were the bonus blocks for the Sage Blossom quilt that was a baby shower gift. I don't seem to have enough of any of the others to make a statement yet, so they may all go into the orphan bin for a bit. I'm sure eventually something will grow into a quilt. Sewing is funny that way, isn't it? Make enough quilts and eventually something will come from the leftovers, much like the volunteer tomatoes that thrive in the compost pile.
Posted by scraphappy at 8:10 PM

The moon quilt is certainly coming together nicely!! And I love all the different projects that you have going on on the design wall! :)

Anna's quilt, Mom's shams, baby showers . . . okay, now I see why you haven't made a quilt for me. I need to (a) get adopted into your family or (b) have a baby. I'm thinking neither one is going to happen! :-)

your moon quilt blocks are wonderful! I'd love to see all these orphans in one quilt - those are always so much fun.