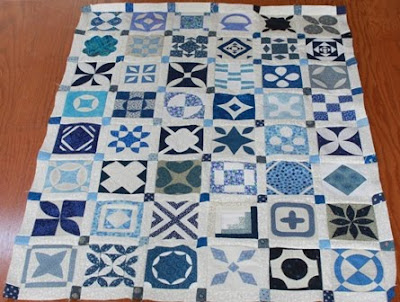 Checking things off the list one by one. On my agenda was sewing the Dear Jane Blocks together so that I could make some space on the design wall for working on Anna's quilt. I bought another table cloth so that I could put up two design walls, but I needed to get some project moved along to make the rearranging easier. I'm thinking of doing a wide scalloped border on this one, I don't know whether I want to add applique or not. This quilt has been in the works for a while now, so it's not as if I need to have it finished tomorrow. I do feel less guilty about working on the Midget blocks without this one lurking in the background. I'm still pondering an attempt at the whole quilt someday, but it won't be monochromatic -- to repetitive to work on long term. Instead I'll just pick a theme. Maybe brights, those would be fun to work on. A happy rainbow radiating out of a bright red center. That would be a fun quilt.
Posted by scraphappy at 2:27 PM

Your DJ blocks look lovely together, but I know what you mean about needing variety when you're working on them. Mine (those that I've done, and I really ought to get back to making a few more) are all done from scraps; I'm using small scale fabrics and trying to use different fabrics for each block.

Congrats on getting it assembled! It looks great!