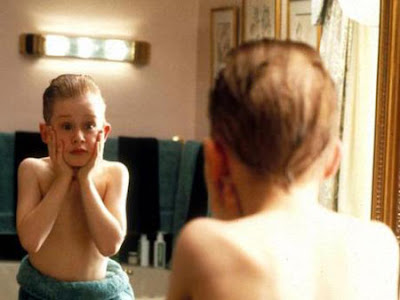 I wasn't feeling up to cooking last night, so we decided to go out to dinner. After much discussion and debate we decided to go to Pizzeria Uno. We told the kids to load up the car and Kurt and I went around checking all the doors before heading out. The girls were complete chatterboxes all the way to the restaurant, telling us about their days at school. When we arrived we got out and waited for the kids to pile out of the car. Out came the girls, still chattering away as we all looked expectantly at the door, waiting for Ryan to come out. One two.... oh no, not a third in sight. He wasn't with us!
Engrossed in playing with his DS, he didn't hear us tell him to hop into the car. With a sinking feeling I grabbed the cell phone and shouted into the answering machine until he came to the phone. He didn't even realize we had left! It didn't seem to concern him that he was home alone and he asked if he could keep playing his DS until we got back again. I offered to keep talking to him on the phone until we got back again so he would have company, but he thought that was just silly. Zipping home again, I rushed into the house with the guilty feeling that I had unknowingly abandoned my child. He finally stopped playing his game long enough to remark, "You have returned for your long lost son abandoned at home." He smiled his goofy little grin and told me that he had evolved his Halcyon while we were gone and then asked if he could keep playing his game on the way to eat dinner. I wonder if he is scarred for life?
Posted by scraphappy at 8:25 PM

That is funny :) Sounds like he is fine, but maybe you are "scarred for life"!?!

Awesome story! He is probably ok, he is what 10? And, he didn't even notice. Cute!

What a funny story, I bet the worst thing that will happen will be that he'll boast about it to all his friends at school and it will get back to their parents! When I left my son behind he was too young to tell anybody - he was about a month old and I put his carry cot down on the pavement while I unlocked the car, then drove off leaving him on the pavement! You can imagine my horror when I realised about five minutes later and had to turn the car around and drive back for him, breaking all the speed limits on the way. He was still there of course, and hadn't noticed a thing.

On a school trip we left someone behind at Dachau. He never noticed either. So it could be worse. At least you didn't leave him at a concentration camp.

What a cute story!! Glad that everything turned out well in the end! lol