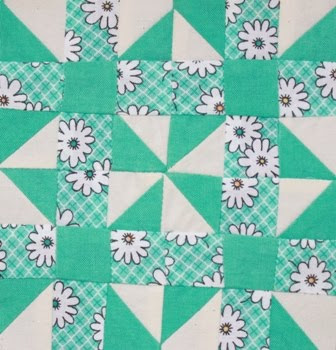 I was feeling all caught up for the moment and so took a few minutes to put together Midget Block 28 today. It is called Calico Puzzle and it was simple, straight forward traditional rotary cutting and sewing. Tiny traditional cutting and sewing. Each of the little blocks is 1.25 inches and there are 36 of them. It really helps when putting these little buggers together to think of each block as a tiny little quilt. Isn't that an adorable little tiny 5 inch quilt? 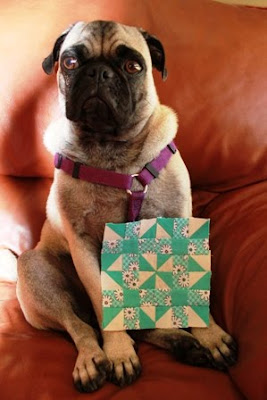 Nobody was home to take a picture of me with the block, so Lizzie was kind enough to hold it while I snapped a photo. Isn't she a great helper? 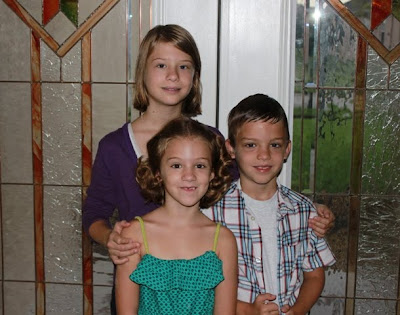 Today was school picture day and Sydney asked me to curl her hair with a curling iron. I tried to do Anna's too, but her hair just wouldn't hold onto the curl. Ryan used gel on his hair. So fancy! Last night they all had a little fashion show for each other while deciding what to wear. I had to run off to a coaches meeting for Academic team, but I listened in on the beginning and it was hilarious.
Posted by scraphappy at 2:13 PM

What a cutie Lizzie is, a perfect photographic model. I always used to smile at the efforts children (and their mothers) used to take with their appearances on school photograph too. Yours look like butter wouldn't melt in their mouths!

What a cute family. I still remember picture day at school. Love the midget block

Love the pic of the block with Lizzie!!! And you have some great looking kids! :)