Last Hurah of the Weekend 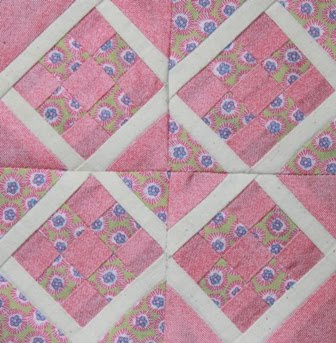 I spent yesterday scrubbing baseboards and touching up the paint in the upstairs hallway. Today for an encore I spackled, sanded and painted three closets. I was pretty much done by the time the guys headed off for football practice and settled in to sew some binding and watch a movie with Sydney. I was tempted to head straight to bed as soon as the kids were settled, but I thought it would be nice to do some sewing today. Block 30 was next and didn't look too scary. Just four little nine patches with a log cabin border and some triangle corners. 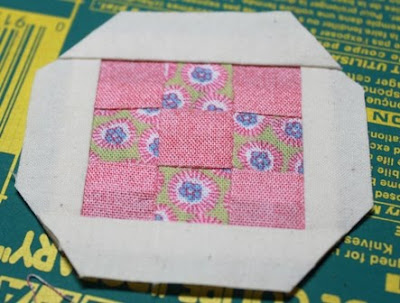 The pattern called for cutting the corners off of the little white strips first, but I thought they might turn out better if I just sewed the white all the way around and then trimmed them down. I'm not sure if it helped or not, but done is the best kind of block of all so I'm calling it good enough. 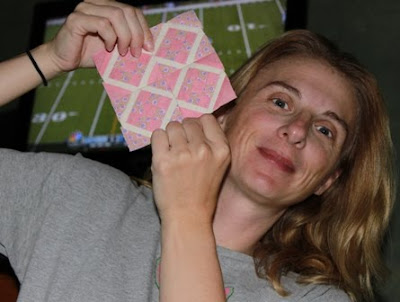 Kurt was nice enough to take a picture for me. As you can see, he has settled in to watch some football this evening. I keep thinking that I should learn to enjoy football for the sake of being social, but it has just never clicked with me. I'm off to call it a night nice and early tonight. This week looks like it will be a busy one, so I'd better rest now.
Posted by scraphappy at 9:24 PM

Busy lady! What a cute block! What sweet, small nine patches! He had to take your picture to get you out of his way! (LOL) mine does the same thing! Have a great week.

Good for you on the painting!! And love that block! :)

Another cute block completed. How many do you have done so far? I wish you could let me have even just 1/3 of your energy.

Please send some of your energy west. :) You have been so busy and still making cute itty bitty blocks! Impressed and amazed. :)