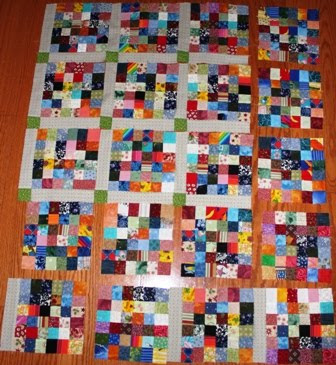 Yesterday was another busy day. We had a make-up lesson for ice skating which overlapped with an academic team match. Kurt and I did the kid swap which allowed me just enough time to pop into Hobby Lobby on the way to the competition. I got home just in time to head to bed so I could start all over again today.
Today was a better day. I don't have to go to the meetings that happen on the third Tuesdays after school, so I took advantage of the extra free time to do a little sewing. I decided to swap out the sashing strips on the postage stamp blocks and go for a more uniform look. Initially I envisioned a white on white strip, but it seemed too stark. I'm still not sure about the green, but I'll let it simmer and see what I think in the light of day. The design wall hasn't made it back up again after the new carpet, so I'll let the floor do the work for today. I am starting to notice a visible difference in the 1.5 inch strip drawer. I wonder how many more blocks I can make before they are gone? 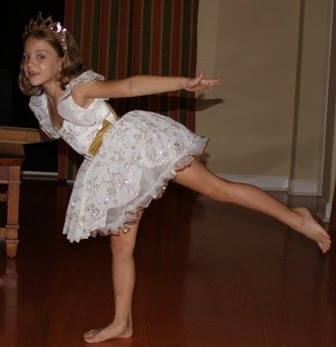 Sydney got one of her costumes for the holiday show. I made her promise not to wear it around the house until after the performance, but she did ask permission to try it on before putting it away. The kids swam this afternoon. I had to turn on the hot tub for them because the solar heater sprang a leak last week. It has actually been quite fall-like lately, at least by Florida standards.
Posted by scraphappy at 9:39 PM

You get so much done. You amaze me. Love the holiday costume!

What a great costume! I agree with the white sashing - it would have been too bright. Good luck! :)