Yesterday Anna and I went to St. Augustine with a friend of mine whose daughter is also a friend of hers. My friend has volunteered to plan the leader daughter camping trip for Girl Scouts this year and wanted to check out the camping sites and get the plans firmed up. Anna and I went along for company and moral support. We did some walking through the historic downtown while we were there and visited the oldest school along with Anna's favorite candy store. Then we walked through the campground and found places for the catered dinner and the campfire. It is a beautiful facility, and it should be a really nice weekend. 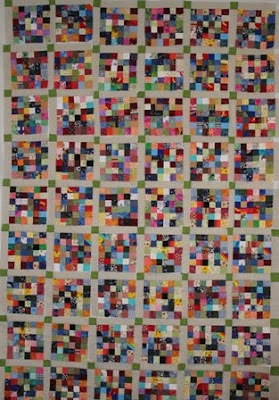 Today I had some time to work on the postage stamp blocks that I have been using to try to whittle down the 1.5 inch strip drawer. I am out of the light colored sashing strips and so need to make some design decisions. I had originally planned to make it twin sized, just because that is my default size if I don't have a specific function in mind for a quilt. To grow that big it would need two more rows of blocks all the way around. I considered switching to another similarly colored sashing strip for the next two rounds before adding a border of the green. I also thought about swapping out the light and dark colored separating strips to make the last couple of rounds a little more border like. 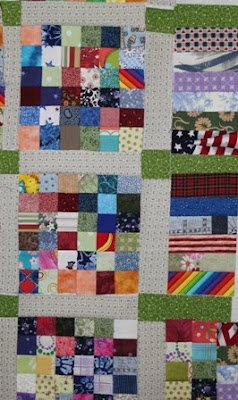 Kurt thinks it should just be a smaller quilt. He wants me to take off the outer sashing strips and replace them with a wider band of the green. I thought instead that I might cut more of the strip sets into a wider band and use that as the border. I might also surround the top with half blocks that are 6 by 3 instead of 6 by 6. I guess I could also try to get some more of the light colored fabric. It came from Connecting Threads and they might still have more to order.
I'm not sure yet which way I'll go, but I guess I'll let it sit up on the wall and see which one calls out to me in the morning. What do y'all think? 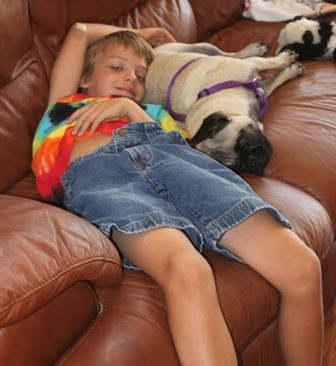 Here is Ryan hanging out with Lizzie this morning. Lizzie seems to like it when the kids use her as a pillow. Or when she can use them as a pillow. I guess either is good for her.
Posted by scraphappy at 8:30 PM

Adorable photo of the lizzie pillow!
The scrap quilt is amazing! All of your ideas sound great...I would probably take the easy way out and make as many rows as possible with the sashing I have and then use some scrappy borders to bring it up to the size I want. How about a green border and then a couple of rows of squares and then another border?

Your scrap quilt is looking wonderful, so colourful and cheerful. Bearing in mind that it IS a scrappy quilt, and that your aim is to cut down on some of your leftovers, I wouldn't buy any more fabric. I think the charm of scrappy quilts is their quirkiness, the use of the unexpected here and there, so I'd go with using up more fabric, perhaps of a completely different colour.

Why not put a strip of green around what you have now and then the blocks sashed in green and another green border.

Going to be a spectacular quilt, Angela

Angie in So CA

Ohhhhhhh What a great use for scraps. I am trying not to start every neat thing I see on other people's blogs....but you aren't making it easy. I really really love that postage stamp quilt. Wow!!!

Great scrap project. I think the size is perfect :)

Great plan with the postage stamp blocks and for getting it done. I have 5x5 blocks that I haven't figured out what to do with yet.

Your postage stamp quilt is beautiful and quite impressive!

So, I was readin' along, and then was stopped dead in my tracks when the page scrolled showing Ryan....

OMG! We've been donning pants and long-sleeves for weeks now....

As for the quilt....I usually get annoyed when people say "whatever you choose will look just great".....blah!

With this quilt being so scrappy, different colored sashing strips wouldn't be a bad idea; so I would probably stick with the original size planned (if you're still motivated to make some more 36-patches of scraps. :0)

Dayle ~ A Collection of Days said...

I’d love to have you link up at my place on November 5th and 6th for The Airing of the Quilts.