I've been putting off the anniversary quilt for Kurt's mom.  First I didn't have a sewing machine, and then I didn't have the photos.  Since Kurt's mom was diagnosed with lung cancer at Thanksgiving he wants her to have the quilt sooner rather than later.  Kurt printed the photos for me this morning on some of the special printer fabric. 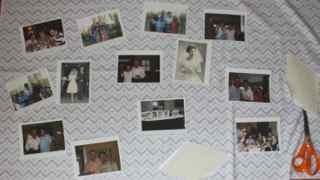 Now I need to prep the photos for reverse applique and sew them behind some plain cream diamonds that I have ready to go. 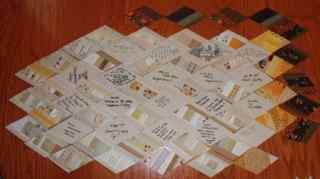 Here are the other blocks so far.  They are a combination of crumb diamonds in cream, gold and brown along with the ones that I had signed by guests at the anniversary party.  I'll add the photos in as soon as they are ready. 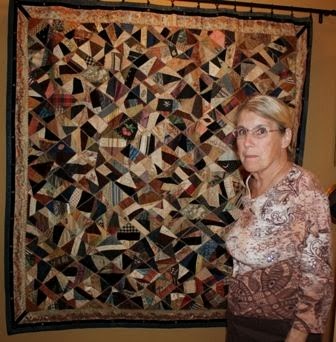 Here is the inspiration quilt which belonged to my mother-in-laws mother and was passed on.  It is was made in 1884.
So, I have some reverse applique in my future.  It will be nice to settle down with some handwork as soon I finish the preparation.
Posted by scraphappy at 12:45 PM

Crazy quilt style...but not quite, eh? It will be a treasured gift and family heirloom. Bless you!

I've done a couple of photo quilts, they are fun to make. I'll be interested to see how yours goes together.