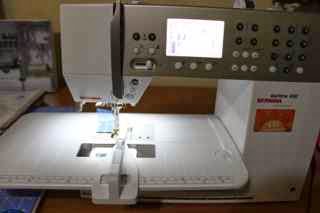 When I took my machine in right after Halloween for repair, I was never dreaming that it would be after the new year before she came home again.  The screw which holds the bottom cover down became dislodged and fell.  When it fell it got caught in the hook assembly which caused it to be damaged as well.  So it has a new hook drive as well as a new cover.  The new cover came with a new sewing platform.  It is white instead of the clear of the original.  It has a nifty clear window though to see the bobbin door.  It came with a new seam guide as well.  It sounds great -- all smooth and quiet.  I feel like I should go and sew something, but it is cold and today was the first day back at school again.  My tank is on empty.  Maybe just one little block -- just to make sure everything is working perfectly.
Posted by scraphappy at 8:42 PM

I am not a happy camper when my main machine is not home! Like I am missing a family member or something!Mine is ready to be picked up....I think I stressed her out doing Bonnie Hunter's Celtic Solstice! SO glad I did the SMALL ONE! Hope you get rested soon. I know the 1st day back at school can be a doozy...

The last time I took mine in just for servicing, it took 9 weeks to get it back. I was not a happy camper, at all.

I know they're 'just' sewing machines, but it never feels right when they're not in their accustomed place does it? Happy sewing.

Hurrah! Enjoy! I'll bet you're counting down to the weekend, LOL

So glad that she is back where she belongs!!

So glad your baby is back and purring fine again. Love the new white plastic extension table. I have a Bernina 440 QE and the clear table broke a couple years ago. I use painters tape to keep it on. Would love to have one of these new white ones. Do you know if they sell them separately? Did you take your machine to Quilting Folks? May have to venture there and check to see if they have them. :o)

Oh sure, just one block! Hah!

Glad your darling is back and working.
Hugs

I have a friend who took her PFAFF in for service Nov of 2012... YUP 2012 and she still doesn't have it back.. Sew much runaround from the shop and service guy. Ridiculous! The good news is...I talked her into buying a Bernina!!!

So glad you finally got your sewing machine back. It's maddening to be without.