I feel like its been forever since I've done a Rainbow Scrap Challenge Sampler block.  Even the wonky star from last week was written in January and saved to later.  Many apologies for the wrong measurements when the post first went up.  It was scheduled during the time we were away on our vacation and it sort of popped up on me.  Several people tried to make it in the too big size -- I'm really sorry about that.  It is OK to tell me that I've messed up!  Really, I won't be offended if you let me know that my numbers were off or the directions weren't clear.
So hopefully this block will be a bit smoother for you.  It uses two sizes of HST blocks. 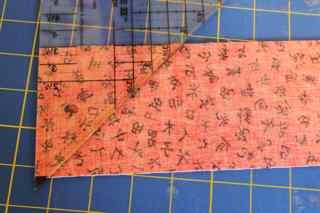 The larger HST unit is cut from 3.5 inch strips.  Place them right sides together and use the easy angle ruler to cut 2 sets of triangles. 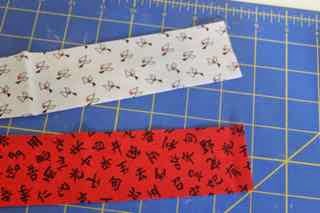 Next, use 2 inch strips to repeat the same process.  Did you know that the large easy angle ruler does not have a mark at the 2 inch line?  I usually use an easy angle junior ruler, but it got put away for company when my sister was here.  I haven't quite gotten everything out again and so tried to use the jumbo ruler instead.  Now I remember why I got the little version.  Anyway, cut 8 sets of triangles from the 2 inch strips placed right sides together. 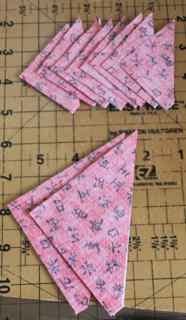 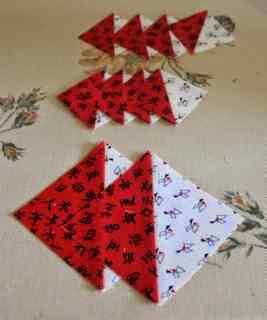 Sew these along the hypotenuse (I just love that word!) press the seams to the dark and trim the dog ears. 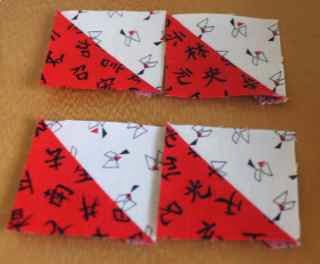 Now take the small HST units and sew them into pairs with the darks all facing down and to the left.  Actually it doesn't matter which way they face, as long as they are all the same. 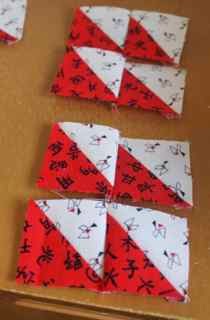 I decided to hold off on pressing here because half of the seams need to go toward the dark fabric and half need to go toward the light.  You may press if you can keep it straight, or just do a quick fingerpress as a temporary measure.  Sew the pairs into four patches, again with all the darks facing the same way. 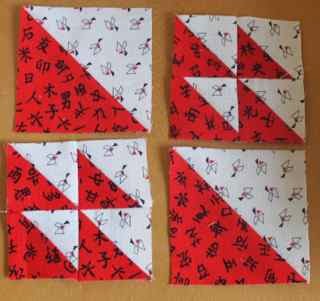 Arrange the small HST four patches into a larger four patch with the large HST units.  All the dark triangles will continue to face in the same direction. 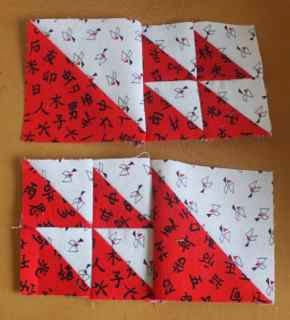 Sew those into pairs and press to the large HST unit. 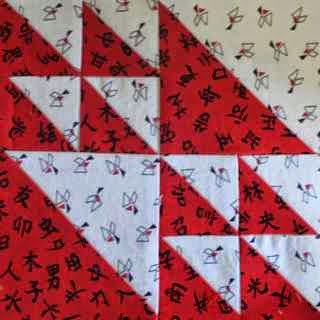 Sew the two patches into a four patch and enjoy!  Your unfinished block should measure 6.5 inches.
Posted by scraphappy at 3:22 PM

That finished block always looked so complicated to make - boy, was I wrong! Thanks for making it so simple!

What a cute block!

Mmmm when will I get time to do this block this week.

Your white background fabric in this block will be showing up in some of my red blocks.

I've been enjoying the sampler blocks, thank you for researching and posting all the blocks.