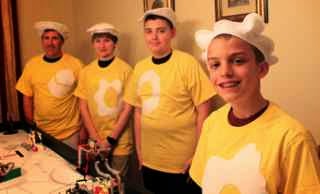 I am officially in manic overdrive.  Overbooked is so far behind me that I can't even remember what it looked like.  Though we have only been back at school for two days since the break, it feels like a lot longer.  Everything that is going on is GOOD.  There is just so much of it that I can't get it all into a day!  So tonight was Lego practice, and it involved sewing :)  We have an egg theme going on this year, and so we made egg berets and egg shirts.  If there is time before the tournament, there will also be egg pennants for the cheering section.
We figured out a while ago that the Lego qualifying tournament and the Science Olympiad qualifying tournament were both on the same day.   No problem though, Kurt would do one and I would do the other.  We both coach the Lego team, he does the robot part and I do the problem and team building part.  Ryan is on that team.
I am the only coach of the Science Olympiad team, and Anna is on that one.  Divide and conquer and all will be well.  All was well until Kurt scheduled a business trip to India on the same day.  India!  So another mom from the team will fill in for him and I will still go to mine.  No problem right?  Last night we were talking at dinner when we realized that his trip to India also happens during my annual AP Biology field trip.  The overnight one to the University of Florida!  So I'm taking 18 students out of town for a day and half while Kurt is literally half way around the world.  YIKES!  A lovely coworker who is apparently also and angel has offered to come and stay with the kids overnight while I am gone.  Deep sigh of relief.
I think all the balls are in the air at the moment, just hoping none of them drop.
Posted by scraphappy at 9:45 PM

You can do it! And hey, at least all those things will be done.

Oh wow. So much organising already... Welcome back to work

Yikes! So glad you have some good friends to step up and help out. Wish I was closer so I could help.

You must home school. I would have killed my child and if I had done that. She margainally made it out alive after 18 years as it was!

Now she looks back and says, NOW I know why you did that, mom!

The crazy life of the working parents! Glad you got it all figured out! I LOVE the egg theme...egg penants will be great fun!

Oh yes, the competing business trip problem. We've had that one too, a couple of times. Thankfully, we have just one and she's usually pretty easy to sneak into one of her friends families for a couple of days.

Hey! If you're in college, you know how often you get asked to write an essay. Especially when asked all the time, it is very difficult to choose a topic. I found a site that has cause and effect essay topics for college students. These themes help me a lot, it's much easier to choose from them!