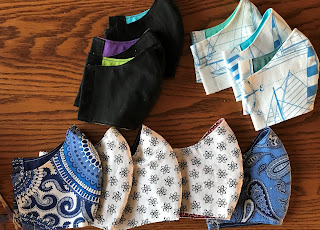 Tomorrow is a new semester at school.  Sydney will be going back in person for the first time since we were all sent home last March.   While I was happy to keep her home and safe, the e-learning is getting more difficult over time and she is one of many who will be returning in person tomorrow.  She asked for black masks in a child size.  Anna wanted more from of sailing fabric.  I don't have any blues to match exactly so I used a variety of greenish blue hues.  I had cut out some atom fabric earlier and blue goes with everything.  I'm awfully tired of mask sewing now, but I'll add the elastic and be done with this batch.  A friend from school wants some for her wedding, and I fixed some elastic for another, but after that  I should be done for now. 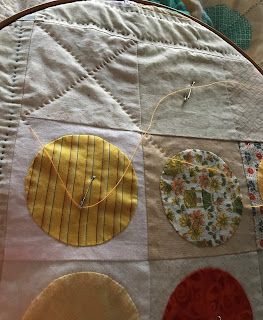 I finished off the orange block of hand quilting on Leap Year and so started on the yellow. 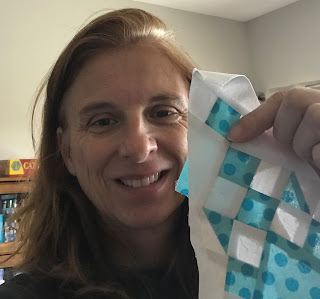 The plan had been to sew on Dear Jane today, and I did get one block done this morning.  This is block number 12 on the left side.  I stitched a tiny applique diamond to the top and added it to the collection.   Most of the day though was spent moving my sewing room -- AGAIN!   Since we've been here I have moved my machine several times.   Ultimately, Sydney's room is meant to be the sewing studio, but until then I am camped out in Ryan's room.  His spring break was tacked on to the end of the winter vacation, so we are unlikely to see him again until summer.  He called last night and was able to switch his schedule around to have in person classes!  Two and a half of them.  Good news indeed.   Now I'm off to wrap my mind around having a new schedule tomorrow.  I've traded 8 seniors in Capstone Research for 24 9th  graders in Honors Biology.  We are on block schedule now, and some unknown number of students will still  be learning from home, so even a familiar class will seem new again.
Posted by scraphappy at 6:15 PM

Stay safe at school, you guys!!

Shoot... I forgot to make Emily pink masks! Yikes. Good luck at school tomorrow for both you and Sydney. Hope the block days work well for you. My kids enjoy the longer classes and less moving around.

Hope you and your kids have good semesters. I loved block schedules for lots of reasons, including having only half as many preps on any given day. But I was teaching in a small district where most of us had 5 or 6 different preps each semester.

I hope you all stay well!

We are in a state of emergency and our schools are closed with on-line learning only. The daily Covid numbers in my area dropped quite a bit yesterday after days/weeks of increases. We were in lockdown for almost a month before the state of emergency was declared so maybe we are starting to see the effects. I hope that lower numbers are the trend!!!

Good luck with school tomorrow, I hope all goes well for the students and staff. I hope all goes well for your uni students, too, I hope that the in-person classes go well for them. My son is back at grad school and will have one class in person, since there are just three students in it. The prof is teaching it on a condensed lecture schedule then giving the students all semester to complete their research projects in the lab. The rest of my son’s classes are virtual. It’s definitely a time for everyone to be flexible. I have taken a break from mask sewing since mid-December, except for making a few elastic alterations. I’m not looking forward to sewing any more just yet...I want to sew on MY stuff. Happily, I am making some progress on a few things. Hopefully you will settle into your new sewing space quickly and be back to sewing more of what YOU want to sew. Take care and stay safe!

I am here to give my testimony about Dr Ose  who helped me in my life, i want to inform the public how i was cured from (HERPES SIMPLEX VIRUS) by dr Ose spiritual, i visited different hospital but they gave me list of drugs like Famvir, Zovirax, and Valtrex which is very expensive to treat the symptoms and never cured me. I was browsing through the Internet searching for remedy on HERPES and i saw comment of people talking about how dr Ose spiritual cured them. when i contacted him he gave me hope and send a Herbal medicine to me that i took and it seriously worked for me, my HERPES result came out negative. I am so happy as i am sharing this testimony. My advice to you all who thinks that their is no cure for herpes that is Not true just contact him and get cure from dr Ose spirirtual healing spell cure of all kinds of sickness you may have. penis enlargement
Remember delay in treatment leads to death email him @ {oseremenspelltemple@gmail.com}
https://www.facebook.com/Dr-odion-spell-temple-110513923938220/

This is another testimony on how Chief Dr Lucky cured my HIV disease. Do you need a cure for your HIV disease? Do you want to be cured from your cancer disease? Or you want to be free from any type of disease. Kindly visit his website https://chiefdrluckyherbaltherapy.wordpress.com/ . He just cured my HIV disease and I’m very grateful to him, he is the only herbalist that can cure you.
WhatsApp number : +2348132777335
Via Email : chiefdrlucky@gmail.com
Thank you all for reading,
God bless"

I'm super excited to tell the public that I have been permanently cured from herpes by Dr Agbomina . I had herpes for years but everyone told me that there was no cure to it and every doctor I contacted failed to cure me until I contacted Dr Agbomina , he placed me on diet and also sent his medicine to me and today I'm free and my lab test confirmed it. You can contact Dr Agbomina via his WhatsApp +234(805)049-5479 or email: dragbonherbalmedicine@gmail.com You can visit his Website at https://dragbonherbalmedic.wixsite.com/welcometodoctoragbon