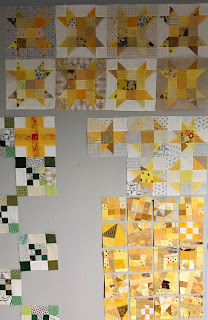 I am steadily adding yellow to the design wall.  The Sister's Choice blocks are leaders and enders.  I think the last two are somewhere in the mix.   I'll shift to Shoostar blocks when those are done.   I've got almost enough yellows pulled and cut for the Garden Trellis blocks.   I'm having trouble mixing the buttery yellows with the brights with the golds.   So that it forcing me to segregate colors together which is making me dig deeper into the scrap bins.   Speaking of digging into the scrap bins.  There were large chunks of crumb fabric all mixed in with the yellow strings.  I've trimmed those up to 4 inches and added them to the wall.  I really should decide on a layout and sashing ideas before I get too much further.  I was thinking about a black border all the way around and then an interrupted white stripe to separate those.  I found an idea on Pinterest, but now can't find it to save my life.  I also saw one called Chain Link on Connecting Threads though, and that would be super cute.    If I just frame half of the blocks out in black and half in white, the rest should be easy to recreate later.
February is always such a long month at school.  The Christmas excitement has passed and it is still a long way to spring break.  We usually have a day off for Presidents day, and that would have made the upcoming weekend 3 days, but they have taken it back for COVID and we are all missing it right now. We had bunches of quarantined students return in the last few days, so I think my classrooms will get pretty full again.   Every day is full of surprises right now and students seem to show up randomly on line or at school.  I am just thankful that they are showing up though!   I know it has been hard on all of us.
Posted by scraphappy at 12:08 PM

Is all of Florida back to school 5 days/week? Are many parents keeping their children homeschooled? In case I'm a no-reply person here is my mail:
quiltyladyrr at gmail dot com

Got the yellow issues too - too bright -too gold - too buttery.
All together it puts my teeth on edge. And I LOVE yellow. I shall try your solution to break them out.

I've only done a little bit of YELLOW sewing. Nice job on digging deep in the scrap bin, Angela!

I've just been pulling for the hexagons so far but... I did finally quilt stashbuster rsc 2020 today. We have a 3 day weekend in our county with Monday off. Em's fair is still on but not sure how it will pan out with some animal diseases happening with rabbits and cavys. Fingers crossed the poultry goes off ok.

Love your yellows!!! I wish I could find more time to do even more quilting but virtual school does take up extra and I need to be there for my grands