A Plan for the Crumbs! 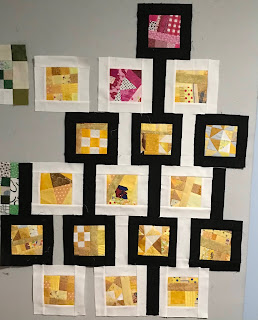 I started framing out the yellow crumb blocks with white and black borders.   The blocks are 4 inches, and the frames are 1.5.    The end result is a 6 inch framed block.   Each row is separated with strips of the opposite color which should visually link the alternating rows.  I grabbed a couple of pink blocks as well to see the combination.  I will need some half blocks for the offset rows, but I think I am enjoying how this will come together.  I'll do some math and then make decisions about how many blocks to make each month.   There are still some yellow crumb chunks hanging out in the strings, but I started to sort through it all last night and had a little ironing party while I was listening to an audio book.  I'm thinking of calling this Interlinked. 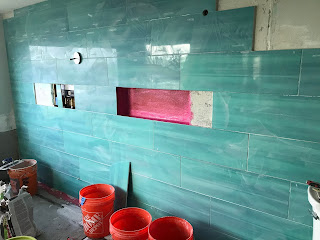 Our bathroom tile has started to come together.  I convinced Kurt to hire a contractor, which is really hard for him to do.  He has been super busy at work though, and the remodel we wanted to do was beyond our skill level.   So far Dave has had to build up the floor and level it under where the jacuzzi tub used to be and then replace all the backerboard with waterproof versions.  He took out the raised box that used to hold the shower and moved the shower plumbing to remove a wall.  He made the nook and installed the smart shower control unit. 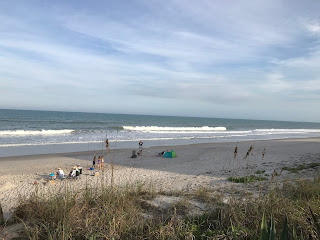 It is starting to feel like spring here.  After several chilly weeks, it is so nice to enjoy fresh air and sunshine again.
Posted by scraphappy at 5:30 AM

Love the design of your crumb blocks with the black and white frames! The new bathroom tile is gorgeous, too. I always love your view, and glad to know it feels like Spring somewhere!

The crumb blocks are looking good. I bet Kurt is starting to get happy with having a contractor - that really sounds like a full time job right there!

Oh, I love those crumb blocks! That pattern is amazing (and enticing). We’ve got some work to do around the house in the bathrooms and basement (sewing studio) and seeing your construction makes me realize what a disruption it’s going to be. But your view and impending spring must help with the de-stressing.

The crumb blocks are looking great. Wishing I was near a beach for some soothing ocean wave sounds.....

Love your crumb blocks! I cannot believe your spring comment though, as I’m stuck and iced in by an ice storm! And awaiting snow next week. And I’m only in central Kentucky, not the cold north!

Please tell your husband he is not alone in not wanting to hire a contractor. We did a master bath remodel 18 months ago and hired the floor tile removal, new tile installation, and shower upgrade done. DH did the painting, trim work including crown molding, and he made the new tile countertop. They did the heavy dirty lifting but he still got to do enough that he was content. We love the results - hope you are as happy with yours.

Your bathroom remodel is going to be gorgeous!! I like the quilt pattern you've chosen for your Crumbs. Have fun with those scrappy blocks!

The white and black border is very striking. Great name too. Love those tiles!

Great approach for using your crumb blocks! I look forward to seeing it grow.

It is nice to have a hubby, willing and able to do the DIY stuff! Mine is willing, but at 76, the able is getting harder! And the $$$ the pros want and need! Yikes!
I like how Intertwined is coming! Yea! For math skills!