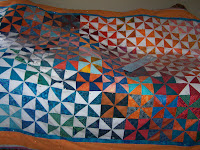 Today is the last day of spring break and I celebrated by getting one last quilt basted and ready to go. Bernie is back in the shop for some sort of warranty repair on the door. When I took her in last week they said something was broken on the door and they would order a part. I was not aware of any problem with the door, but who am I to argue with the experts? So my dear husband dropped her off while I was away for my weekend with Mom and I can pick her up on Tuesday. 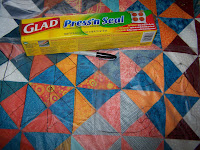 Since I was unable to actually start the quilting, I decided to audition a couple of quilting patterns instead. I tried Glad Press'n Seal and it worked great. It clung to the quilt and let me try out different designs. I was planning to do some sort of swirl in each pinwheel, but was having trouble transitioning from one block to the next. When I had Kurt look at it, he saw the broken dish block instead of the pinwheel and suggested using the same triangle design I have been using recently. He feels that the linear design of the quilt calls for an angular quilting design. I kind of liked the idea of doing a swirl in each of the blocks. I thought the curves contrasted nicely with the straight lines of the quilt blocks. The third option is straight line stitching in the ditch. Any votes?
Posted by scraphappy at 6:56 PM

Hi Angela,
I used to work for the school system, so I know how it feels when the vacation is over. Also, I have tried the Press and Seal for both quilting and machine embroidery. It also works well as a hopefully subtle bib.
I was tagged by a runner, so I hope you don't mind if I pass it on. It's 7 weird or random things about yourself. You can see the rules on my blog:
http://wraggedypatches.blogspot.com/ Thank you, Candace

Regarding the choice of quilting:
I saw a quilt once that had such a COOL optical illusion of being pieced with curves SIMPLY because the quilting was done with curves. The pieces were actually just triangles and squares.

So my vote: A curved quilt pattern-----an illusion of "added curved difficulty" could be the result :0)